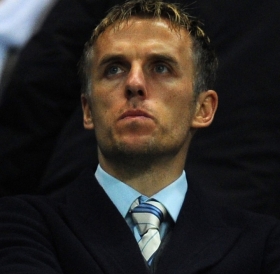 Siblings Lauren and Reece James go from back garden to England history
the 19-year-old Manchester United forward who received her first call-up from Phil Neville this week and Reece – the Chelsea full-back who
21/11 08:00

Is British Football Going Back to the Dark Days of Hooliganism?

It seems hooliganism is threatening British football, and it's the 1980s all over again.

Former Manchester United and Everton star Phil Neville believes Paul Pogba can be regarded as the best midfielder in Europe when he is playing to the best of his abilities.

Manchester United legend-turned-pundit Phil Neville believes Diego Costa is 'better suited to the English game' than Alvaro Morata, who joined as his potential replacement at Chelsea from Real Madrid earlier in the summer.

Former Manchester United defender-turned-pundit Phil Neville believes Harry Kane may have to end his association with Tottenham Hotspur, in order to become a world-class striker.

Everton appear to have won the race to sign Juventus midfielder Luca Marrone on loan until the end of the season. The young Italian has been told he can join the Premier League side for the season for more first team experience.

Manchester United legend Paul Scholes has turned down the chance to become one of David Moyes' new look coaching team at Old Trafford. Last week, deals were completed to bring in Phil Neville and Ryan Giggs as first team coaches.

Manchester United have confirmed Phil Neville as their new first-team coach. David Moyes has hired the 36-year-old as a part of his coaching staff.

Manchester United are on the verge of completing a deal for Phil Neville, who will move to Old Trafford as the Red Devil's new first team coach. The 36-year-old arrives at United as part of David Moyes' new coaching team.

Everton have become the latest club to be linked with a move for Swansea City defender Ashley Williams. The New Everton manager Martinez is a long time admirer of the Welsh stopper and would want a reunion.

Everton manager Roberto Martinez has confirmed that the club are ready to discuss terms with Phil Neville regarding a coaching role at Goodison Park. Neville retired at the end of last season.

It was a remarkably strange close season as some of the biggest names in English football called time on their careers; this wasn't just big names on the pitch but also a notable managerial retirement too...

According to reports, Tony Pulis' representatives have been in contact with Everton regarding the vacant manager job at Everton. The Toffees will part company with David Moyes on the 1st June.

Manchester United's new manager David Moyes wants to bring Phil Neville with him from Everton. The former Man Utd defender, 36, could join Moyes as his assistant.

Alex Ferguson this week said that Wayne Rooney is still considered a traitor to Everton fans, and much of the build up to this game has focused on the England striker. Nevertheless, Man Utd will be hoping Rooney is in form and morale dented after 6-1 defeat to Man City is fully restored.

Everton defender Phil Neville has revealed he would never join Man City, due to his allegiances to former club Man Utd. The comments are sure to be slightly directed at Carlos Tevez, who made the controversial move from City to United last summer.