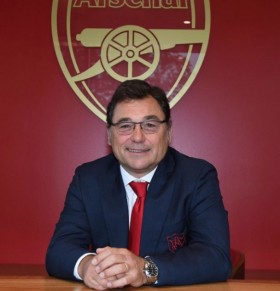 Arsenal handed incentive to open contract talks with William Saliba and Gabriel Martinelli
without commanding a transfer fee. That is a situation that Raul Sanllehi was keen to address during his brief spell as Arsenal head of
03/02 07:00

Matteo Guendouzi's agent Philippe Nabe will reportedly hold talks with the Arsenal hierarchy regarding the future of the French midfielder.

The Athletic correspondent David Ornstein has revealed that Arsenal's head of football Raul Sanllehi is reportedly in advanced discussions with Paris Saint-Germain over a mid-season deal for Layvin Kurzawa.

Atletico Madrid have reportedly made contact with super-agent Jorge Mendes to try and broker a deal with Arsenal for French attacker Thomas Lemar.

Arsenal's Unai Emery handed with deadline to save his job

Arsenal boss Unai Emery has reportedly been handed with one month to save his managerial job with the north London giants.

Arsenal's Head of Football Raul Sanllehi has said that manager Unai Emery does not have any personal issues with Mesut Ozil and the German needs to work harder to earn regular gametime.

Bordeaux have had a bid approved by Arsenal to sign defender Laurent Koscielny. The French veteran centre-back will make a move back to Ligue 1 for a transfer fee of around 5 million euros, with the former France international signing a two year contract with his new club.

Arsenal are reported to be eyeing a surprise loan move for Barcelona midfielder Philippe Coutinho this summer.

Arsenal director of football Raul Sanllehi has reportedly opened discussions with Barcelona chief Eric Abidal over a possible move for Samuel Umtiti in the summer.

Arsenal boss fighting to keep midfielder at the club

Arsenal manager Unai Emery has reportedly not given up on the prospect of keeping Aaron Ramsey despite the midfielder's recent contract breakdown with the club.

With Arsenal midfielder Aaron Ramsey heading into the final six months of his Gunners contract, the club appear to have retracted their final offer to the Welsh international and will now let the player leave the club. Ramsey and Arsenal had been close to agreeing terms on a fresh contract.

Arsenal's newly appointed head of football Raul Sanllehi has revealed the club have no plans to sign new players come January, believing that the transfer window causes a panic buying situation across Europe. The Gunners are currently on a run of 11 games from which they have won all 11 times.

Arsenal's director of football Raul Raul Sanllehi has opened up on his plans for the club during the coming six months. Sanllehi is now in charge of Unai Emery's expenditure on new players in the wake of Ivan Gazidis' departure from the Gunners to AC Milan.

Arsenal are interested in signing Sevilla midfielder Ever Banega and have made him their number one priority, the Sun reports.

Arsenal have reportedly stepped up their pursuit of Nice midfielder Jean Michael Seri as they seek to bolster their midfield department in the summer.