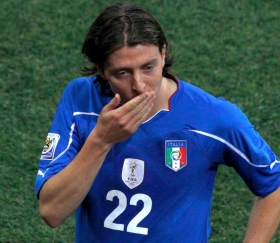 Why Riccardo Montolivo’s premature retirement is a lesson in trading immortality for mediocrity
Liverpool's 'weak links' stand tall on biggest day of season so far CHAT S*** Jamie Vardy is the most iconic striker in Premier League
14/11 14:38

AC Milan are prepared to offer an escape route to Manchester United outcast Bastian Schweinsteiger. The German footballer has not featured for the Red Devils this season.

AC Milan not after Fabregas

AC Milan boss Vincenzo Montella has insisted that his side are not in the running to sign unsettled Cheslea midfielder Cesc Fabregas. The Spain international has made a solitary league start for the Blues this term.

AC Milan midfielder Riccardo Montolivo had to be substituted during last night's 0-0 friendly draw with the Republic of Ireland. The Milan captain is set to miss the World Cup.

Arsenal have reportedly shown interest in AC Milan midfielder Riccardo Montolivo, according to his agent.

Montolivo may move to Milan

Reports in the media claim that Fiorentina's wantaway midfielder Riccardo Montolivo may snub a move to Premier League in favour of a move to Italian champions AC Milan.

AC Milan have denied showing interest in Fiorentina midfielder Riccardo Montolivo, with CEO Adriano Galliani clearly stating that the club will not open its cheque book in January.

Tottenham on alert as Montolivo talks break down

Tottenham are on red alert as Riccardo Montolivo has been told by Fiorentina that he will not be allowed to leave the club in January, so the Italian will leave once his contract expires next summer.

Reported Arsenal target Riccardo Montolivo has been informed not to expect a January move, although he will be allowed to leave on a free transfer in the summer.

Fiorentina midfielder Riccardo Montolivo looks set to stay at the club and agree a new contract. Arsenal had been linked with the Italian midfielder.

Fiorentina captain Riccardo Montolivo is one of several new players that Chelsea coach Andre Villas-Boas would like to bring to Stamford Bridge; with talk of a 12m GBP transfer offer for the midfielder.

Italy coach Roberto Donadoni has warned Alessandro Del Piero that his place may be in jeapordy. Del Piero recently insisted Donadoni only play him up front, and the coach seemingly agreed, but now he has suggested younger players have a chance of making the squad up front.