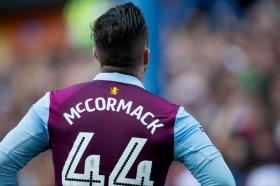 Ross McCormack - Leeds United fans memories of a class act
an absolute gem of a transfer fee, what more can you ask for." Matthew Melsome-Smith - "Last minute winner against Burnley! Absolute scenes
16/01 16:30

Championship side Aston Villa are considering the sale of Ross McCormack just four months after his arrival from Fulham.

Aston Villa have completed the signing of Ross McCormack from Fulham on a four year deal.

Everton manager Ross Martinez has been keepings tabs on Scotland and Fulham striker Ross McCormack. The Toffees are looking to add strength to their front line as Steven Naismith looks set to join Norwich City.

July 1st saw the Transfer Window re-open and numerous players swapped clubs having already made an agreement over the course of the last six months. Amongst yesterday's most noted rumours includes the potential move of Luis Suarez from Liverpool to Barcelona. Follow the rest of yesterday's rumours here.

Fulham target Ross McCormack has demanded that he be transfer listed as the Scotsman looks for to push his way out of the Leeds United exit door this summer.

Newcastle to move for Ross McCormack

Newcastle United are the latest team to have expressed an interest in Scottish forward Ross McCormack. The 27-year-old is reportedly Alan Pardew's top transfer priority for the summer.

Sunderland have allowed young striker Connor Wickham to move on loan to Leeds United until the end of the season. The 20-year-old had been linked with a host of other teams but has opted for a short term deal to move to Elland Road.

West Ham United are reportedly set to make an improved bid for Leeds captain Ross McCormack, as per The Daily Mail.

According to reports West Ham United have made a bid for Leeds United striker Ross McCormack. The 27 year old has scored 17 league goals this season in only 21 matches.

Celtic keep up the pressure with victory over Hearts; Rangers respond to go 4 points clear at the expense of Killie; Falkirk break into top 6 after thumping St Mirren 4-0; Hibernian capitalise on Aberdeen's Euro hangover; Motherwell win away at Fir Park against Gretna; Caley hold Dundee United in Inverness.