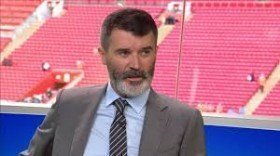 Patrick Vieira aims dig at Roy Keane and says he 'doesn't want to touch' Manchester United shirt
a number of run-ins as the two sides did battle for the Premier League title year after year. Their rivalry reached boiling point in 2005
23/06 20:00

Manchester United legend Roy Keane has said that his former club should sanction the departure of Paul Pogba in the summer, given the Frenchman has no intention of staying put with the club.

Man Utd legend Roy Keane thinks that a move for Tottenham midfielder Christian Eriksen would be ill-advised, believing that the Danish international would add no further quality to the club's ranks. Eriksen's deal at Spurs ends at the end of this season and the player can leave the club on a free transfer.

Manchester United legend Roy Keane has said that the Red Devils have nothing to be concerned about, should Paul Pogba make way from the club at the end of the season.

The age of the supercoaches

For some spectators watching the World Cup this summer, they’ll be doing so with one eye on the action on the field, and another focused on the technical areas.

Manchester United legend-turned-pundit Roy Keane believes Chelsea attacker Eden Hazard is way behind the likes of Lionel Messi and Cristiano Ronaldo as he does not possess the consistency over an extended period of games.

Republic of Ireland manager Martin O'Neill is on the cusp of an emotional return to the Premier League. The former Leicester City boss is on the verge of agreeing terms with Stoke City.