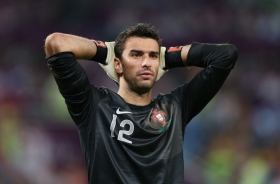 Aston Villa reporter hints at another arrival if El Ghazi leaves
the player be met. Jose Mourinho, who has already raided the Premier League after bringing both Tammy Abraham and Rui Patricio to AS Roma,
23/08 17:20

Wolverhampton Wanderers could reportedly secure the signature of Pepe at the turn of the year after the Portuguese ace mutually terminated his contract with Besiktas.

Premier League newcomers Wolverhampton Wanderers are on the cusp of luring Portuguese midfielder Joao Mario from Inter Milan this summer.

Everton have reportedly joined the likes of Arsenal in the pursuit of Sporting winger Gelson Martins. The Portugal international has been widely tipped to leave the club on a free this summer following a training ground incident last month.

Wolverhampton Wanderers have reportedly launched a late attempt to sign Sporting Lisbon goalkeeper Rui Patricio ahead of Serie A side Napoli.

Watford are targeting Gent's 6ft 7in goalkeeper Lovre Kalinic as Marco Silva looks to add competition for the number one jersey at Vicarage Road. The Hornets' new manager has turned to the Croatian international after missing out on Sporting Lisbon's Rui Patricio.

Watford are plotting an approach to sign Sporting goalkeeper Rui Patricio during the summer transfer window. The Portugal international has spent his career in the Primeira Liga, and he could be up for a new challenge next season.

Arsenal are reportedly lining up a &pound13m for Euro 2016 hero Rui Patricio. The Portugal international is currently in the ranks of Primeira Liga club Sporting.

Portugal international Rui Patricio is prepared to end his long-term association with Sporting for a move to the Premier League this summer. Everton, Liverpool and Manchester City have previously been linked with the goalkeeper's signature.

Manchester City boss Pep Guardiola is lining up a bid for Euro 2016 hero Rui Patricio. The Sporting Lisbon man was a key performer for Portugal as they went on to lift the European crown in France earlier this summer.

Everton to swoop for Rui Patricio?

Everton are preparing a potential bid for Sporting Lisbon goalkeeper Rui Patricio. The 28-year-old was highly influential for Portugal during their Euro 2016 triumph earlier this month.

Liverpool are reportedly in negotiations with Sporting Lisbon over a summer move for goakeeper Rui Patricio.

Sunderland have been keeping tabs on Portuguese 25-year-old shot stopper Rui Patricio. The Sporting Lisbon star has also been monitored by Arsenal scout Francis Cagigao in the past.

Rangers into the UEFA semi

Rangers secured a memorable 2-0 victory over Sporting Lisbon in Portugal to earn themselves a place in the semi final of the UEFA Cup thanks to goals from Jean-Claude Darcheville and Steven Whittaker.

Rangers battle to a draw

Scottish giants Rangers handed Sporting Lisbon a great chance to take advantage as the Scots failed to capitalise on home advantage and play out a 0-0 draw at Ibrox on Thursday evening in the UEFA Cup.