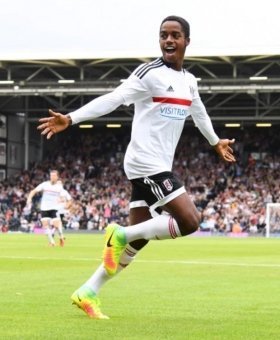 Tottenham ace Ryan Sessegnon drops hint over future transfer after Hoffenheim loan spell
and Tottenham something to think about for the 2021/22 campaign. Limited in terms of appearances last year in N17 following his transfer
06/01 18:16

Tottenham Hotspur have confirmed that Giovani Lo Celso has picked up a hip problem which is expected to sideline him for around six weeks.

Premier League giants to return for Paulo Dybala in January

Tottenham Hotspur will reportedly come up with a renewed bid to sign Paulo Dybala from Juventus during the winter transfer window.

Sporting president Frederico Varandas has claimed that only Tottenham Hotspur had made a serious offer to sign Bruno Fernandes during the summer transfer window.

Tottenham Hotspur have announced the signing of Giovani Lo Celso on a season-long loan deal from Sporting with the option to buy at the end of the season.

Tottenham and Fulham have opened transfer talks regarding a move for versatile left-sided defender Ryan Sessegnon. The 19-year-old, who is considered one of the brightest young players in England, will discuss personal terms with Spurs this summer if a deal is agreed between the two clubs.

Tottenham Hotspur have reportedly moved closer to acquiring the signature of Ryan Sessegnon from Championship side Fulham.

Tottenham Hotspur are reportedly leading Manchester United in the race to sign Ryan Sessegnon from Fulham at the end of the campaign.

Manchester United are reportedly planning to splash cash to lure Ryan Sessegnon from Fulham when the current season comes to a close.

Man Utd are rumoured to be in the race to sign Fulham's prized asset Ryan Sessegnon. The highly-rated youngster, who is considered by many to be amongst the best teenagers in the Premier League, has also been linked with a move to Chelsea and Tottenham but it is understood that Manchester United have been appointed favourites to sign the England youth international.

The opening day of the 2018 World Cup coincided with the announcement of a Pan-American tournament in 2026. With the 2022 World Cup also looming fast, football fans across the world are already looking at a number of emerging talents, all of whom could light up the planet with their skills. What has yet to be decided, however, is whether the players in question should stay where they are or aim for the stars at club level to become England’s next hero.

Tottenham Hotspur have reportedly given Mauricio Pochettino the go-ahead to make a summer approach for Anthony Martial.

Manchester United manager Jose Mourinho is reportedly plotting an attempt to sign Fulham wonderkid Ryan Sessegnon after having tracked the teenager's progress over the past couple of games.

Newcastle United manager Rafael Benitez is plotting a surprise approach for Manchester United outcast Luke Shaw at the end of the season.

Tottenham Hotspur manager Mauricio Pochettino could reportedly lodged an attempts to pursue Luke Shaw and Ross Barkley from Manchester United and Everton respectively when the transfer window reopens next month.

Fulham's teenager sensation Ryan Sessegnon has been identified as a potential target for Manchester United ahead of the winter transfer window.

Tottenham chairman Daniel Levy has informed club acquaintances that he is becoming increasingly frustrated with the lack of progress being made for a move for Fulham starlet Ryan Sessegnon. The England youth international is considered one of the finest prospects of his generation.

Fulham teenager Ryan Sessegnon has emerged as a surprise option for Manchester United during the final stages of the summer transfer window.

Tottenham are close to completing their second signing of the summer window, Southampton goalkeeper Gazzaniga. The deal comes just a day after Davinson Sanchez joined from Ajax.

Mauricio Pochettino has come on record to say that he wants to bring in four more players to his Tottenham side as rumours surrounding Davinson Sanchez's imminent arrival intensifies.