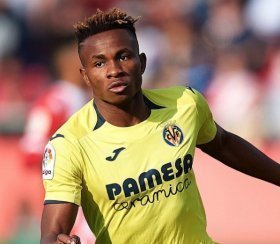 Chelsea are reportedly to be eyeing a summer swoop for Villarreal winger Samuel Chukwueze as they seek to reinforce their options in the wide attacking department.

Liverpool are deemed to have failed with a late approach to sign Samuel Chukwueze from Villarreal during the January transfer window.

Chelsea to swoop for Nigerian winger next month?

Chelsea are reportedly lining up a January move to sign Samuel Chukwueze from Spanish side Villarreal.

Spanish giants Real Madrid have reportedly added Callum Hudson-Odoi to their wishlist and they could make a move for the Chelsea winger at the end of the season.

Villarreal winger Samuel Chukwueze is reportedly a target for Premier League side Bournemouth, with the Cherries' manager Eddie Howe sending his main scout to monitor the Nigerian international in action.  Chukwueze has caught the eye in La Liga since making his debut in 2018.