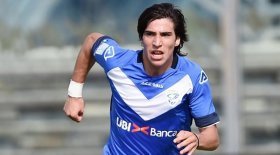 Inter Milan are reportedly planning to step up their interest in signing N'Golo Kante from Chelsea during the current transfer window.

Juventus have been revealed their asking price for Brescia midfielder Sandro Tonali.

Serie A holders Juventus are reportedly leading Manchester United in the race to sign Sandro Tonali from Brescia during the summer transfer window.

Italian sports journal Corriere dello Sport writes that Juventus are in pole-position to land highly-rated Italian international midfielder Sandro Tonali. The 21-year-old, who was nurtured in the youth ranks at Brescia, is starting to fulfil his huge potential with the Rondinelle this term, and a summer move to one of Italy’s heavyweight clubs has always looked like the inevitable outcome.

Manchester United have reportedly keeping a close watch on the proceedings of Brescia youngster Sandro Tonali as they seek to bolster their options in the midfield.

Manchester United were reportedly keeping a close eye on Brescia midfielder Sandro Tonali during the Serie A clash against Bologna at the weekend.