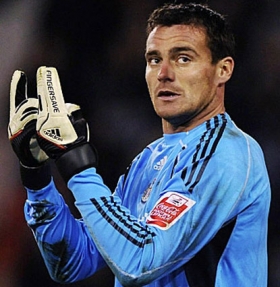 Former Newcastle United goalkeeper Steve Harper has linked up with Sunderland until the end of the season.

To appreciate Harper's 20 years of service for Newcastle United, which came to an end when he joined Hull City Tigers this summer, he will be honoured by an all-star team facing off against AC Milan at St James' Park.

The all star squad will feature the likes of Alan Shearer, Andy Cole, Les Ferdinand, Faustino Asprilla and Joey Barton in the line-up.

Hull City have snapped up 38-year-old goalkeeper Steve Harper on a one year contract. The former Newcastle shotstopper is currently a free agent.

Manuel Almunia has been linked with a shock move to Premiership rivals Newcastle from Arsenal. The Spaniard has fallen down to third choice goalkeeper at the Emirates.

Newcastle goalkeeper Steve Harper is believed to be ready to leave the club, as the Toon look to accumulate cash as they prepare for life in the Championship.

The Newcastle United management has ditched Alan Shearer and is set to bring back Joe Kinnear as the new boss today. This decision is certain to infuriate the already angry Newcastle United fans who had backed Shearer to lead them.

Newcastle boss Joe Kinnear has admitted that he is likely to make some big changes to his squad over the coming months and in the summer. There have been a series of high profile names linked with a Toon exit.

Tottenham are apparently interested in signing Newcastle's number 2 striker Steve Harper. The player would be allowed to leave the Toon for a figure in the region of 1 million GBP.

Arsenal have been linked with a shock January move for Newcastle goalkeeping understudy Steve Harper. The keeper's contract expires in the summer, but there have been reports Arsene Wenger could make a move this January for a small fee.

Blues push United all the way

Chelsea's 2-0 win over Newcastle means that the title will be decided on the last day of the season. Goals from Ballack and Malouda were enough to clinch a deserved victory.

Kevin Keegan has told the media that Steve Harper will not be leaving the club despite interest from Liverpool. Apparently, Rafa Benitez are keen on signing the player who is supposedly Shay Given's understudy.

A Michael Owen first half brace downed Sunderland in the 139th Tyne-Wear derby this afternoon. There have been rumours aplenty that Owen is set to quit his club after being cagey regarding a new contract, but Owen proved in today's Premiership match that he can still perform in the biggest games.

Newcastle boss Kevin Keegan has warned Shay Given that the impressive form of Steve Harper could cost him a longer spell on the sidelines. Keegan has praised Harper for the way he has taken his opportunity in the Newcastle goal.

A relegation battle between two sides who have had a shocking season in the Premiership. Kevin Keegan is still desperately searching for his first win in the Premiership, while Roy Hodgson will still be flying high after their 1-0 victory over Everton last week. Newcastle will take heart from the fact that Fulham have not won in 31 games on the road.

Michael Owen rescued Newcastle a much needed point at St. Andrews last night, with a second half goal. The goal helped end the dismal run of four defeats that the Toon had suffered. However, the pressure is still firmly on Kevin Keegan as the Toon are still not safe from relegation.

Newcastle backup goalkeeper Steve Harper believes that the next two games are the biggest of his career. Harper has taken over the number 1 jersey as Given battles back to fitness after suffering a groin injury.

John Carew grabbed a memorable second half hat-trick to complete a superb comeback over Newcastle as Aston Villa romped to a 4-1 victory. Owen had given Newcastle an early lead, only Bouma to equalise. But Norweigan forward John Carew stepped up to finish off Newcastle in superb fashion.

Newcastle United goalkeepers Shay Given and Steve Harper - as two of the club's longest serving players - have moved to reject claims that there is 'unrest' at St. James' Park and that the players have voiced their concerns to boss Sam Allardyce.