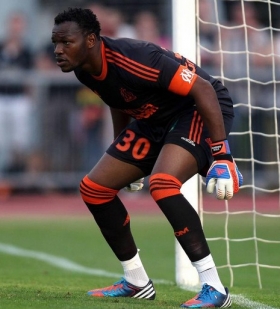 Crystal Palace are pursuing Roma goalkeeper Lukasz Skorupski as manager Frank de Boer looks to add depth and competition to each position in his squad. With Steve Mandanda leaving for Marseille earlier in the transfer window, The Eagles currently only have two senior goalkeepers; Wales' Wayne Hennessey and veteran Julian Speroni.

Following Crystal Palace's appointment of Frank De Boer, the Dutchman was expected to link up with former player Jasper Cillessen but the Barcelona goalkeeper has ruled out a move to Selhurst Park.

Liverpool have struggled to find a goalkeeper to consistently perform and claim the number one position in recent years. As he plans to strengthen for next season, Jurgen Klopp has identified a shock Premier League goalkeeper as a target.

France international Steve Mandanda has hinted that he could leave Crystal Palace in the future. The 31-year-old still has the desire to join a top Premier League club.

Liverpool striker Christian Benteke has settled personal terms with Crystal Palace ahead of his proposed switch this summer. The Belgian was restricted to just 14 league starts for the Reds last term.

Arsenal full back Carl Jenkinson is set to move away from the Emirates this summer as Alan Pardew continues his transfer window spending spree that has already seen the Eagles sign Andros Townsend and Steve Mandanda. Palace are to pay around £6 million for Jenkinson.

Crystal Palace have completed the signing of Marseille goalkeeper Steve Mandanda for a fee of around &pound1.5m. The France international makes the move to the Premier League after nine years of service at Stade Velodrome.

Chelsea are reported to have discussed terms with outgoing Marseille goalkeeper Steve Mandanda. The Frenchman is set to end his nine-year association with Les Phoceens when his contract expires at the end of the month.

Marseille goalkeeper Steve Mandanda is widely expected to head to the Premier League at the end of the season. The France international is in the final months of his contract at Marseille, and talks over an extension seem to have stalled.

Everton will reportedly seek to lure goalkeeper Steve Mandanda on a free transfer this summer.

Arsenal are apparently being associated with a move for Marseille goalkeeper Steve Mandanda in the summer, as per Le 10 Sport.

Arsenal are understood to be hopeful of signing Marseille goalkeeper Steve Mandanda as a potential replacement for Wojciech Szczesny.

French giants AS Monaco are reportedly eager to secure the services of Tottenham Hotspur shot-stopper Hugo Lloris in the summer transfer window.

Olympique Marseille maintained their 100 percent start to the Ligue 1 by beating Valenciennes with a goal to nothing.

Ramsey strike wins it at the end

Raymond Domenech has found no room in his France preliminary squad for Euro 2008 for David Trezeguet of Juventus, who despite stunning form for the Turin giants will not be making the trip to Austria and Switzerland.

Liverpool crushed Marseille 4-0 in the Velodrome to guarantee their place in the last 16 of the Champions League. It didn't take like for the Reds to assert their dominance, as Stevie Gerrard scored in the fourth minutes. Goals from Dirk Kuyt, Ryan Babel and Fernando Torres saw Liverpool through.