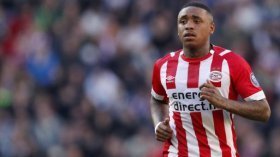 Every word Nuno said on Cristian Romero, Harry Kane, Steven Bergwijn, injury news and Newcastle
has a new podcast! We've brought together your two favourite Tottenham reporters in Alasdair Gold and Rob Guest to keep you up to date
15/10 14:48

Tottenham Hotspur have received a double injury boost ahead of their Premier League clash against Manchester United on Sunday.

Tottenham have reportedly enquired about the signing of Real Madrid defender Eder Militao.

Steven Bergwijn opens up on his dream Tottenham debut

Tottenham’s Steven Bergwijn has opened up about his dream debut against Manchester City in Premier League, last night.

PSV Eindhoven attacker Steven Bergwijn is reportedly interested in making the move to Manchester United next summer, provided they are able to offer him with Champions League football.

Tottenham Hotspur and Arsenal are reportedly among the leading clubs in the running to sign Ivan Perisic from Inter Milan at the end of the season.

Manchester United have reportedly renewed their interest in signing Ivan Perisic after learning that Inter would be prepared to part ways with the winger.