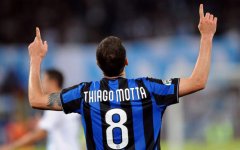 Manchester United have reportedly been deemed favourites to pursue a winter move for Real Madrid midfielder Luka Modric. The Croatia international previously plyed his trade in the Premier League with Tottenham Hotspur between 2008 and 2012.

Manchester United have lodged a surprise attempt to sign former Arsenal and Chelsea midfielder Lassana Diarra this month. The France international is currently out-of-contract after a stint with Al Jazira in the Middle East.

Paris St Germain have completed the signing of Inter Milan midfielder Thiago Motta, who arrives in France on loan for a fee believed to be in the region of 7.5 million GBP. Motta links up with his former manager, Leonardo, who is director of football at the French giants.

Inter Milan midfielder Thiago Motta yesterday admitted that he could make a move to ambitious French side Paris St Germain this month, if the two clubs can agree a fee with each other.

Arsenal yet to bid for Thiago Motta

Arsenal have yet to make an offer for Inter Milan midfielder Thiago Motta. The Gunners have been credited with an interest in the defensive midfielder.

Inter Milan's Ricardo Quaresma will sign for Genoa in the summer following his 'bad' loan spell at Chelsea. The Portugese winger was loaned to the London club in the January transfer window but could not get many chances to make an impact.

The former Argentine striker, Hernan Crespo, is a 'free' agent and will sign a contract with Genoa for next season. His contract with Inter Milan ends this summer.

Injury prone midfielder Thiago Motta has revealed he is close to agreeing a deal with his current club Atletico Madrid. The midfielder signed from Barcelona in the summer and has not seen much first-team action due to injury.

Sevilla will be host to the red and white team from Madrid who lead them by two points and a position in the league table.

Atletico Madrid could be set to make a bid for Barcelona midfielder Thiago Motta. Recently, Barcelona's sporting director Aitor Beguiristain had announced the Brazilian had no future at the club, and a series of clubs have expressed an interest in the talented 24 year old.

Thiago Motta has been linked with a transfer to Juventus. Recently, Barcelona's sporting director Aitor Beguiristain had announced the Brazilian had no future at the club, and a number of Italian clubs have expressed an interest in the 24-year old.

Motta on the move

Thiago Motta is set to leave Barcelona after Frank Rijkaard informed him there was no place for him in the starting lineup. The talented Brazilian midfielder is admired by the fans who like his ability to battle for every ball. AC Milan are among the sides linked with his signature.