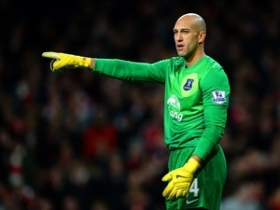 Tim Howard opens up on Sir Alex Ferguson fear and time David Moyes lost it with Everton team-mate
played 414 games for the Blues across a 10-year spell at Goodison Park, after joining the club from Manchester United initially on...
30/06 18:00

Everton are preparing a summer approach for Arsenal's back-up goalkeeper David Ospina. The Colombian international is said to be considering his future at the Emirates after he fell below Petr Cech in the pecking order.

Everton will reportedly look to bring Netherlands international Jasper Cillessen as a replacement for outbound star Tim Howard. The Ajax goalkeeper had been previously linked with a move to Manchester United last summer.

Everton will reportedly seek to lure goalkeeper Steve Mandanda on a free transfer this summer.

Tim Howard could reportedly leave Everton at the expiry of his contract this summer.

Everton are said to be eyeing a summer move for Arsenal goalkeeper Wojciech Szczesny.

Crystal Palace are rumoured to be interested in a move for Everton's backup goalkeeper Joel Robles. The Eagles want Robles to take over the number 1 jersey at Selhurst Park.

Everton in for Ospina?

Everton have become the latest club to be interested in signing Arsenal goalkeeper David Ospina, according to reports.

USA international Tim Howard has ruled out a summer move away from Everton, according to a report.

Everton are believed to be tracking the transfer status of Manchester City goalkeeper Willy Caballero, according to a report.

Everton have deployed scouts to watch impressive young German goalkeeper Loris Karius. The FC Mainz shotstopper is available on a free transfer in the summer.

Everton boss Roberto Martinez could be set for a reunion with Qatar international Ali Al-Habsi in January, The Mail reports.

Everton's American goalkeeper Tim Howard is set to be considering a return to his homeland. After a long stay in the Premier League, the USA international is wanted by Miami in the MLS.

Everton goalkeeper Tim Howard will sign a contract with his current club that will see him stay at Goodison Park into 2018.The keeper had been told that he was an important part of manager Roberto Martinez's plans at the Toffees and is now to pen a fresh deal.

Everton shot-stopper Tim Howard has agreed to a new deal at the club which would extend his stay until the summer of 2018.