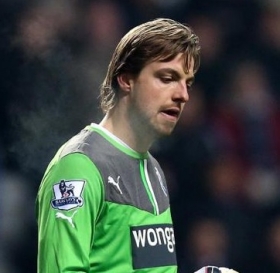 Tim Krul pens new deal to stay with Norwich City until 2024
goalkeeper in the Championship as he looks to lead the Canaries back to the Premier League at the first attempt. Farke said: "It's fantastic
25/12 18:35

Manchester United manager Jose Mourinho hailed David de Gea as the best goalkeeper in the world after he made a string of excellent saves during his side's 3-1 triumph over Arsenal.

Newcastle United are weighing up a move for West Ham United goalkeeper Adrian with a view to offering him the number one role at St.James Park.

Newcastle must strengthen in this one key area

Newcastle go into the final game of their season against Barnsley knowing that the Championship title is not out of their reach, as they are currently a single point behind leaders Brighton.

Chelsea identify potential No.2 for next season

Newcastle United goalkeeper Karl Darlow has emerged as a potential option to replace Asmir Begovic at Stamford Bridge next season.

Krul heads to the Premier League

Newcastle United goalkeeper Tim Krul is to undergo a medical today ahead of a loan move to Watford.

Watford are hoping to wrap up a deal for Tim Krul from Newcastle United before the transfer window slams shut. Tim Krul is currently on loan at Ajax.

Paris Saint-Germain goalkeeper Salvatore Sirigu has emerged as the latest player who could take up the backup role at Stamford Bridge.

Premier League leaders Chelsea are prepared to offload Asmir Begovic to Bournemouth in the January transfer window. The Blues will look to recruit Newcastle United's Tim Krul as backup.

Dutch goalkeeper Tim Krul will make a move to Ajax from Newcastle United on loan. Krul has been told that he can leave St James' Park on loan for the current campaign.

Newcastle United are reportedly considering a move for Crystal Palace goalkeeper Julian Speroni to put a stop to their ongoing goalkeeping crisis.

Crystal Palace boss Alan Pardew has denied claims that the club are interested in a summer move for Newcastle United goalkeeper Tim Krul.

Newcastle goalkeeper Tim Krul has been linked with a shock move to Manchester United. Krul will only move to Old Trafford should United decide to sell their current selection of goalkeeping talent.

Newcastle United are reportedly readying a shock emergency loan move for Chelsea’s veteran shot-stopper Mark Schwarzer, according to The Star.

A determined Costa Rica side bowed out of the World Cup after coming up against the Dutch's secret weapon, Tim Krul.