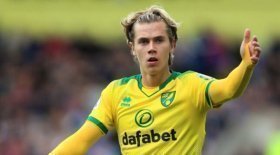 Norwich v Brighton: match preview
games aside, one time bright spark Todd Cantwell’s last goal in the Premier League was 21 games ago on 1 January 2020. And while Norwich are
15/10 13:33

Leeds United have made a formal bid of £15m to land the signature of Todd Cantwell from Norwich City.

RB Leipzig forward Timo Werner is reportedly keen on making the move to Liverpool this summer despite the fresh interest from Manchester United.

Liverpool have reportedly earmarked Norwich City midfielder Todd Cantwell as a potential replacement for Adam Lallana at the end of the season.

Liverpool yet to open transfer talks for German striker

Liverpool have yet to open talks with RB Leipzig over a possible summer deal for German forward Timo Werner, The Independent reports.

Liverpool are reportedly leading the likes of Manchester United and Manchester City in the race to sign Norwich City attacker Todd Cantwell this summer.

According to Liverpool Echo, Liverpool are keeping close tabs on Norwich City midfielder Todd Cantwell, who is also said to be on the transfer radar of Manchester City, Manchester United and Tottenham.