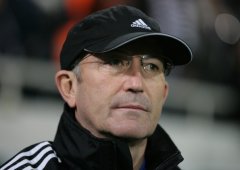 Baby steps against PSG to Bristol City: Tony Pulis on why Kane Wilson's rise was never in doubt
would continue when he was named on the substitute bench in West Brom's Premier League clash with Middlesbrough at The Hawthorns. If he had
03/07 07:00

Former Chelsea midfielder John Obi Mikel has completed his return to England after joining Championship side Middlesbrough on a short-term contract.

Former Chelsea midfielder John Obi Mikel is reportedly undergoing a medical with Championship side Middlesbrough ahead of his proposed switch from Tianjin TEDA.

Everton have reportedly set their sights on securing the signature of Middlesbrough defender Ben Gibson after ending their interest in Newcastle United's Jamaal Lascelles.

Chelsea are reportedly making significant strides towards the signing of Adama Traore from Middlesbrough at the end of the campaign.

Alan Pardew has left West Bromwich Albion by mutual consent after failing to overturn the club's fortunes over the past four months.

Stoke City are reportedly looking at the possibility of recruiting Tony Pulis for a third spell. The Potters have endured a poor run under Mark Hughes, and they are currently ahead of the drop zone by a solitary point.

West Bromwich Albion have cut ties with head coach Tony Pulis following their 4-0 home defeat at the hands of Chelsea last weekend. The Baggies are presently just one point adrift of the relegation zone.