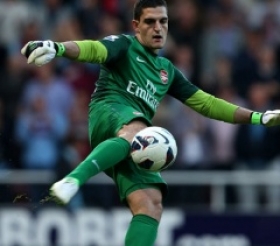 Manchester United manager Jose Mourinho hailed David de Gea as the best goalkeeper in the world after he made a string of excellent saves during his side's 3-1 triumph over Arsenal.

Every year hundreds of academy players get released from the club they have been at for years. Those who do  get the contract they have been working for, are often then the subject of a number of loan moves without ever getting close to the first team of their parent club. We often forget just how hard it is for young English players these days. The riches of the premier league ensure that clubs would rather invest in players than invest in time, and let their home-grown players thrive. Every season although, there are exceptions. Injuries can lead to opportunities, and cup competitions can offer a platform for young Englishmen to launch the start of their career. These players have taken the most of their opportunities this year, and it won’t be long until they’re considered for the England senior team.

Sunderland have landed the services of Boavista goalkeeper Mika for an undisclosed fee. FIFA gave permission for the transfer to go through after technical difficulties resulted a delay in paperwork on deadline day.

Sunderland have began discussions with Manchester City over a possible loan deal for goalkeeper Joe Hart. The England international is currently the third-choice at the Citizens behind Claudio Bravo and Willy Caballero.

Sunderland boss David Moyes has refused to rule out a late bid for Manchester City goalkeeper Joe Hart. The Black Cats are on the search for a new shot-stopper after Vito Mannone was sidelined with an elbow injury.

Former Newcastle United goalkeeper Steve Harper has linked up with Sunderland until the end of the season.

Former Arsenal shot-stopper Vito Mannone has insisted that he is happy plying his trade for Sunderland and not concerned by the transfer speculation surrounding him.

Sunderland manager Gus Poyet is planning a shock move for WBA's goalkeeper Ben Foster. The England international is reportedly willing to agree a move to another team if they double his salary.

Sunderland have been keeping tabs on Portuguese 25-year-old shot stopper Rui Patricio. The Sporting Lisbon star has also been monitored by Arsenal scout Francis Cagigao in the past.

Paolo Di Canio's busy summer could cost Sunderland in the long run, will they hold on to their Premier League status?

After Paolo Di Canio failed in his efforts to bring Gino Peruzzi to the Stadium of Light this transfer window, it appears that the Italian manager has contacted Arsenal regarding the availability of right back Carl Jenkinson.

Lazio shot stopper Federico Marchetti has denied that Premier League side Arsenal have made his club an offer for his signature. The Italian international, 30, had been linked with a move to the Emirates as Arsenal's new number 1.

Arsenal midfielder to be loaned out

The Gunners are set to allow midfielder Francis Coquelin to move on a season-long loan deal to Bundesliga club SC Freiburg as per reports.

Queens Park Rangers' manager Harry Redknapp has officially confirmed that Brazilian goalkeeper Julio Cesar will quit the club this summer. Arsenal are reportedly in discussions with the goalkeeper's representatives.

Arsenal will sign Julio Cesar from QPR after the Confederations Cup has finished. Arsene Wenger will sell Vito Mannone to Sunderland and then bring in the Brazilian keeper from relegated QPR.

Sunderland have agreed a deal that will see Italian goalkeeper Vito Mannone join the Black Cats this summer. Arsenal's third choice goalkeeper has been lined up as a possible replacement for Simon Mignolet.

Arsenal's Manuel Almunia has been signed by West Ham United for an initial one month emergency loan to provide cover for the injured Robert Green.