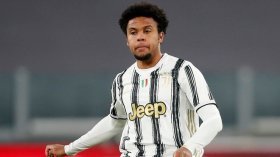 USMNT star and Tottenham target Weston McKennie shows off his piano skills, plays head tennis with a fan and dances with excitement at the thought of Beyonce's new album, as Juventus midfielder enjoys being back home
. Sportsmail reported earlier this week that McKennie is being targeted by Tottenham, but Juventus may be hesitant to sell him after Paul
31/07 00:27

Juventus are willing to allow Aaron Ramsey to leave on a free transfer when the transfer window reopens.

Juventus are reportedly leading the race to sign Paul Pogba when his Manchester United contract expires next summer.

Chelsea are set to compete with Real Madrid and Juventus to sign Monaco midfielder Aurelien Tchouameni.