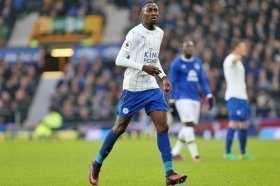 Manchester United have identified Wilfred Ndidi as a potential candidate to bolster their midfield next year.

Manchester United have reportedly included Wilfred Ndidi in their shortlist of targets to strengthen the midfield department this summer.

Real Madrid have reportedly joined Manchester United in the race to sign Ismael Bennacer from AC Milan during the summer transfer window.

Leicester City have no plans to sell 23-year-old star

Leicester City have no plans of selling midfielder Wilfred Ndidi this summer amid the reported interest from Manchester United and Paris Saint-Germain.

Leicester City midfielder Wilfred Ndidi has insisted that he is enjoying himself with the Foxes amid the transfer interest from Manchester United.

'He will get better and better', Frank Lampard praises young attacker

Chelsea manager Frank Lampard has heaped praise on Mason Mount after the youngster scored his maiden goal for the side during the 1-1 league draw against Leicester City.