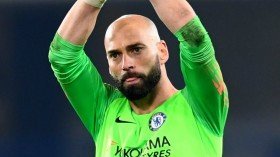 Willy Caballero delighted penning new Southampton contract
season, says the club reignited his passion when they unexpectedly handed him a Premier League lifeline. “It's not because I'm 40,
02/07 13:53

Chelsea are reportedly happy to consider a loan departure for Kepa Arrizabalaga following the arrival of Edouard Mendy from Rennes.

Chelsea have reportedly reached an agreement to sign goalkeeper Edouard Mendy from Rennes.

Chelsea could be open to swapping Kepa Arrizabalaga in a potential deal to sign Gianluigi Donnarumma from AC Milan this summer.

Chelsea are set to face Arsenal in the FA Cup final this evening. The Blues ended their Premier League season on a good note by securing a top-four spot and they now have the opportunity to win their first piece of silverware under Frank Lampard.

Kepa Arrizabalaga believes his Chelsea career is over

Kepa Arrizabalaga believes he may have played his final game for Chelsea after being dropped by manager Frank Lampard earlier this month.

Chelsea are prepared to accept the permanent sale of Kepa Arrizabalaga this summer, should any club make an offer of £50m.

Chelsea are scheduled to face Manchester United in the FA Cup semi-final this evening.

Willian has reportedly assured Chelsea that he would remain committed to them until the completion of the current campaign, which has been delayed by the COVID-19 pandemic.