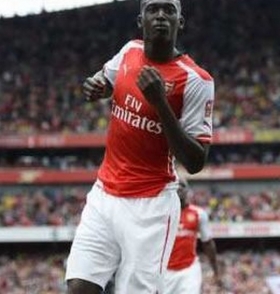 Huddersfield Town's January transfer target is applying pressure to Yaya Sanogo already
him best for his time at Arsenal, where he didn’t exactly set North London ablaze. Loans with the likes of Crystal Palace, Ajax and Charlton
25/02 18:00

Antoine Griezmann reveals why he will reject future Arsenal move

Atletico Madrid forward Antoine Griezmann has revealed that Arsenal were close to pursuing his services during his time at Real Sociedad - back in the summer of 2013.

Speaking in the aftermath of Arsenal's FA Community Shield victory against Chelsea on Sunday, Arsene Wenger revealed that more players will be on their way out of The Emirates in the near future.

Dutch giants Ajax are expected to cut short on the loan of Arsenal striker Yaya Sanogo, according to reports.

Ajax have enquired on the possibility of signing Arsenal goalkeeper Wojciech Szczesny during the summer transfer window. It is understood that the Eredivisie giants are looking to sign a replacement for Jasper Cillessen, who is closing on a move to Manchester United.

Arsenal striker Yaya Sanogo will make his way to Eredivisie side Ajax on loan for the season.

Ligue 1 side Lille have enquired over the possibility of signing Arsenal striker Yaya Sanogo on a season-long loan deal.

Championship leaders Bournemouth are looking at the possibility of signing striker Glenn Murray from Crystal Palace on loan for the rest of the season.

Arsenal could soon star off talks regarding a potential move for Roma forward Mattia Destro, according to a report.

Papiss Cisse is a shock target for Premier League side Crystal Palace. The Senegalese international is wanted by his former coach at Newcastle and recently appointed Palace coach, Alan Pardew.

Arsenal striker Yaya Sanogo is closing in on a loan switch to Crystal Palace, The Mirror reports.

French striker Yaya Sanogo has turned down a move to Hull City and will transfer to Crystal Palace on a season long loan deal. The Eagles' newly appointed manager Alan Pardew agreed a deal for Sanogo with Arsenal manager Arsene Wenger on Saturday morning.

Sunderland manager Gus Poyet admitted that he is struggling to find the players that he needs in the January transfer window. The Uruguayan coach has been linked with several players but has yet to make any new signings.

Ligue 1 outfit Bordeaux are hopeful of sealing a loan deal for Arsenal striker Yaya Sanogo, according to a French source.

Leicester City manager Nigel Pearson is in talks with Arsenal regarding a loan move for French striker Yaya Sanogo. The player will be allowed to leave the Emirates on a loan deal.