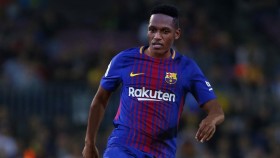 Everton manager Carlo Ancelotti is reportedly keen on landing the signature of Kurt Zouma from Chelsea during this summer's transfer window.

Cameroon international Nicolas Nkoulou is wanted by Everton to fill a defensive void at the Toffees. The centre-back, who has impressed since making a move to Serie A side Torino, is a top target for Everton manager Carlo Ancelotti.

Barcelona are reportedly plotting an attempt to sign midfielder Paul Pogba from Manchester United as early as the January transfer window.