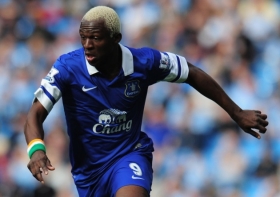 Arouna Kone explains 'tough test' during Everton spell and how he overcame it
beginning to life on Merseyside. The striker followed Roberto Martinez to Goodison Park in the summer of 2013, but was forced to...
15/06 09:50

Everton forward Arouna Kone is set to join Crystal Palace this evening. The 33-year-old will be allowed to leave Everton in favour of a move to London.

Everton boss Roberto Martinez has revealed that Steven Naismith will decide on his future in two weeks' time.

Everton to loan out Arouna Kone?

Everton have been told to pay £3m for Kenwyne Jones by Premier league rivals Stoke City. However the toffees only want to pay £1m for the striker who is out of contract in the summer.

Following an enquiry made by the Toffees for Juventus striker Alessandro Matri, the turin based club have demanded the Premier League side to fork out £12m for the player according to Mediaset.

Antolin Alcaraz is reportedly all set to seal a move to the Everton FC after having agreed a two year deal with the club. Alcaraz is a free agent after leaving Wigan Athletic at the end of the season.

The Latics have completed the signing of Norwich City striker Grant Holt for an undisclosed fee as per reports from Sky Sports.

Newcastle United will make a move for French striker Loic Remy this summer. Alan Pardew wants to bolster his strike force with a move for the QPR striker, who is eager to leave the Championship side.

Arouna Kone is set to complete a £5 million move from Wigan to Everton this afternoon. Roberto Martinez made Kone one of his primary transfer targets for the summer transfer window.

Newcastle have made a late entry in the pursuit for Wigan Athletic striker Arouna Kone. Kone was earlier expected to complete a move to Goodison where he would link up with former boss Roberto Martinez.

According to SkySports, Wigan striker Arouna Kone is prepared to link up with former boss Roberto Martinez at Everton in a deal worth £5millions. Wigan defender, Antolin Alcaraz, is also expected to follow his teammate to the Goodison Park, the report suggests.

Wigan striker Arouna Kone is open to a move to Premier League newcomers Crystal Palace. The forward will quit his current club this summer as he is eager to return to England's top flight.

Wigan striker Arouna Kone has revealed that he has no plans to link up with his former boss Roberto Martinez at Everton. The Ivorian forward is happy where he currently is.

Sevilla have completed the signing of impressive Ivory Coast international Romaric from Le Mans. Arsenal were reportedly interested in the 24 year old, but Sevilla have won the race.

Tottenham midfielder Didier Zokora has said that he is delighted to be working under new boss Juande Ramos at White Hart Lane. Recently, in the absence of Robbie Keane, Ledley King and Paul Robinson, was given the captain’s armband.

Sevilla had the perfect preparation for their Champions League game with Arsenal on Wednesday, thanks to a 4-1 victory over Recreativo. Elsewhere, Thierry Henry still waits for his first goal for Barcelona as the Catalans drew 0-0 with Osasuna.