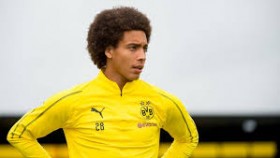 Report: UCL club hand Newcastle boost, after PIF table contract to target who ‘radiates calmness’
wish of a January transfer for Axel Witsel, amid rival interest in the Borussia Dortmund midfielder from Newcastle United. That’s according
30/11 22:30

Tottenham midfielder Mousa Dembele could be set for a shock move to China, as question marks remain over the Belgian's long-term future at the North London side. Dembele had been locked in talks with numerous teams over the summer but has so far decided to stay put with Spurs.

Manchester United have reportedly been offered the opportunity to sign midfielder Axel Witsel from Tianjin Quanjian during the ongoing transfer window.

Axel Witsel followed the likes of Oscar to the Chinese Super League in 2017 and for many, that was a disappointing decision. Witsel has still yet to have tested himself in any of Europe's top five leagues.

Pierre-Emerick Aubameyang looked set to join Ligue 1 club Paris Saint-Germain not too long ago before the French club pulled out of the deal. Now, amid interest from Liverpool, the Gabon striker is preparing to join Chinese Super League club Tianjin Quanjian.

Manchester United will reportedly have to fend off interest from the Chinese Super League in order to sign midfielder Marcelo Brozovic in the summer.

Chelsea owner Roman Abramovich will reportedly block any deal which would see Diego Costa move to China in the transfer window. The Blues have already lost Oscar and Mikel John Obi to the Chinese Super League this month.

Christian Benteke off to China?

Crystal Palace striker Christian Benteke could be the latest high-profile player heading to the Chinese Super League. The Belgian international joined the Eagles from Liverpool for a club-record fee in the summer.

Serie A champions Juventus are prepared to trigger the release clause of Sevilla midfielder Steven N'Zonzi. The Frenchman is currently in negotiations over a fresh contract at the Estadio Ramon.

Italian champions Juventus are preparing to offer a pre-contract to Manchester City full-back Pablo Zabaleta amid the uncertain future of Stephan Lichtsteiner.

Juventus will step up their pursuit for a new midfielder when the transfer window reopens in January. The Old Lady failed to find a replacement for Paul Pogba who rejoined Manchester United on a world-record fee in the summer.

Liverpool, Everton to fight it out for Witsel

Liverpool are set to battle it out with Everton for the signature of Zenit St.Peterburg midfielder Axel Witsel. The Belgian international was tipped to join Juventus over the summer, before the move fell through at the final minute.

Juventus are reportedly extremely confident of securing the signing of Axel Witsel in January from Zenit Saint Petersburg after failing to sign him in the recent summer window.

Axel Witsel sad on missing out on Juventus transfer

Axel Witsel is distraught on missing out on a deadline day move to Juventus, according to his father. The Belgian international was linked with the likes of Everton and Chelsea last month, but it was the Old Lady who had held a concrete interest in his services.

Blaise Matuidi, who is believed to be a target for both Manchester United and Chelsea, as well as Italian champions Juventus, is valued at €50 million by his current club Paris Saint Germain, according to reports in France.