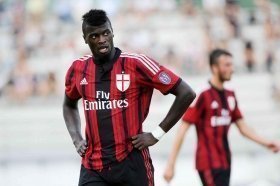 Reported West Brom summer target M’Baye Niang left frustrated at another failed move
) for the former Watford loanee. Niang’s proposed move to the Hawthorns, however, failed to materialise. The international ...
11/10 08:00

M'Baye Niang, who was linked with a move to Everton among several Premier League clubs, has reportedly agreed terms with Russian club Spartak Moscow ahead of an €18 million move.

AC Milan forward M'Baye Niang is apparently holding out for an Arsenal move despite the impending interest from Everton, Calciomercato claims.

Everton are set to complete their third signing of the summer as AC Milan's M'Baye Niang closes in on a move to the Toffees.

French striker M'Baye Niang has reportedly stated his desire to return to AC Milan once his loan spell at Watford concludes in the summer.

Watford could be forced to pay record fee for forward

Watford will have to cough up a club-record &pound13.5m sum, should M'Baye Niang net 10 goals between now and the end of the campaign.

Manager Walter Mazzarri has hinted that Watford could offload the services of striker Odion Ighalo before next week's deadline.

AC Milan forward M'Baye Niang has linked up with Watford on an initial loan deal. The Hornets will have the option of securing a permanent contract for the player in the summer.

AC Milan boss Vincenzo Montella has revealed that M'Baye Niang could be leaving the club before the close of the transfer window.

Arsenal are weighing up a potential bid for AC Milan forward M'Baye Niang. The Frenchman has made a bright start to his season with the Rossoneri.

AC Milan's M'baye Niang has denied speculation of a switch away from the San Siro this summer. The Magpies were keen on acquiring the services of the young forward in 2012 when he was playing his trade for French club Cannes, but missed out as he opted to move to the Serie A giants AC Milan.

Arsenal are to complete a deal for 16 year old starlet M'Baye Niang, according to reports from France. The Caen striker is considered to be one of the hottest prospects to come out of France for several years.