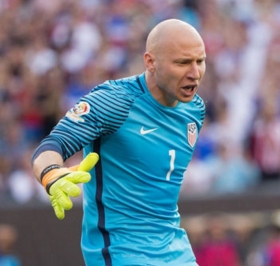 Alan Hutton, Glenn Whelan & Tommy Elphick: The players who should and shouldn't leave Aston Villa this summer
the club’s perennial happy camper. Half of those appearances came in the Premier League with Remi Garde unconvinced by Brad Guzan. The 34-
18/02 12:25

Chelsea close in on the title whilst Middlesbrough are relegated

The emotions of the two sets of players and fans couldn't have been any different when the full time whistle was blown at Stamford Bridge on Monday night. Chelsea knew that a win would leave them just three points away from regaining the Premier League trophy, whilst anything less than a win for Middlesbrough would see them relegated to the Championship.

The day's early kick off sees Manchester City travel to Middlesbrough, competing for a place in the FA Cup semi finals. The home side have struggled recently in the league, so this cup tie will be a welcome break. City are on the hunt for silverware, and finding themselves some way behind Chelsea in the Premier League, and with some strong teams still in the Champions League, may see the FA Cup as their best chance.

Middlesbrough have moved quickly to sign Brad Guzan from Aston Villa on a free transfer. The American international shot stopper has signed a two year contract with the newly promoted Premier League side.

Championship outfit Middlesbrough have completed the signing of Aston Villa's veteran goalkeeper Shay Given on a one-month emergency loan.

Aston Villa goalkeeper Brad Guzan has ruled out a transfer move to Arsenal, insisting that he is very happy at his current club and he took time to thank manager Paul Lambert for the regular first team action he has been enjoying so far this season.

37-year-old goalkeeper Shay Given is planning a transfer move in the January transfer window. The Ireland international is frustrated with manager Paul Lambert who has so far yet to offer the Irishman any first team action.

Liverpool are to launch a surprise move for Aston Villa goalkeeper Shay Given. The Irish shotstopper has been playing second fiddle to Brad Guzan at the Villans since last season and is ready to quit his current club in search of a new challenge.

American goalkeeper Brad Guzan has signed a new four year contract with Aston Villa. The keeper has ousted Shay Given from the first team and has now officially cemented his long term future with the Villans as he begins a brand new contract.

Out-of-contract goalkeeper Marian Kello is set to join Aston Villa as a replacement for Brad Guzan. The Slovakian international has not extended his contract with Hearts and agreed on an early termination of the contract by mutual consent.

Aston Villa line up Given offer

Man City backup Shay Given has told his agent to find him a new club for next season due to an increasing frustration at playing second fiddle to Joe Hart. Aston Villa boss Alex McLeish is readying a £3m offer for the Irish shot stopper.

West Ham goalkeeper Rob Green is being considered by new Aston Villa coach Alex McLeish. The England international goalkeeper is valued by the Hammers at around 4.5m GBP.

Brad Friedel has revealed he is delighted to have finally completed a move to Aston Villa, and hopes that the club do not give up in their quest for signing another American goalkeeper, Brad Guzan.

Villa close in on Guzan

Aston Villa could be set to sign Brad Guzan from the MLS this summer. It is understood that the Villains are set to pay £750,000 to land the goalkeeper at some stage in the coming weeks.

American goalkeeper Brad Guzan has eyed a move to Premiership side Aston Villa again. The keeper has been one of the best goalkeepers in the MLS and Martin O'Neill is desperate to find a keeper after the club missed out on Scott Carson.

Guzan to Villa in summer

Aston Villa are set to sign American international goalkeeper Brad Guzan in the summer after their initial offer for the Chivas USA starlet was accepted but failed a work permit request. Martin O'Neill has revealed he will make another £2m offer for Guzan.

Aston Villa boss Martin O'Neill has admitted that he still hopes to sign the American goalkeeper Brad Guzan in the summer transfer window from Chivas USA.

Aston Villa have missed out on the signing of Brad Guzan. The American keeper had been chased by Arsenal for some time, but a work permit wasn't offered to the goalie and he will now return to the MLS.

Chivas USA goalkeeper Brad Guzan could be set for a shock move to Arsenal after the club's president admitted that 'several European sides' were interested in the keeper. Celtic, Olympiakos and Everton are also interested in the player.