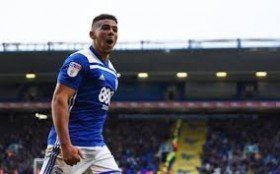 Southampton will complete a move for Birmingham City striker Che Adams next week, signing last season's Birmingham top goalscorer for a fee of around £15.75 million. The Saints have been chasing Adams since January and will be the club's first major acquisition of what is expected to be a busy transfer window.

Birmingham City forward Che Adams has reportedly been earmarked as one of the prime targets to bolster the Everton attack during the summer transfer window.

Tottenham Hotspur have reportedly joined the likes of Arsenal and Manchester United in the hunt to sign Che Adams from Birmingham City this summer.

Manchester United and Arsenal are reportedly among the top clubs looking into the signing of Birmingham's highly-rated forward Che Adams during the summer.

Ahead of a day of uncertainty in the English Championship, the only thing that we knew was that one big name in the history of English football would be relegated to the third tier, with Birmingham City, Nottingham Forest and Blackburn Rovers all fighting the drop.