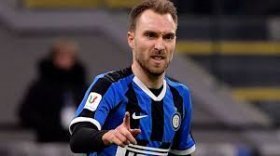 Eriksen could quit Inter in January transfer window amid interest from PSG
scored 69 times for Tottenham. Christian Eriksen ‘one of ELEVEN Inter stars up for sale’ months after transfer from Tottenham as Conte eyes
26/10 19:29

Manchester United are planning to revive their interest in Christian Eriksen, who formerly played for Tottenham Hotspur.

Inter Milan manager Antonio Conte is keen on a reunion with Chelsea defender Marcos Alonso during the current transfer window.

Chelsea boss Frank Lampard has given the green light for the club to offload Emerson this summer.

Inter midfielder Marcelo Brozovic is likely to remain in the summer amid the interest from the Premier League and La Liga.

Denmark international Christian Eriksen has confirmed that he had held discussions with Manchester United for a while before making the move to Inter Milan from Tottenham Hotspur.

Fernandes's arrival at Spurs set to hasten the departure of Eriksen

Jose Mourinho has made his first signing since becoming Spurs manager with the capture of Portuguese midfielder Gedson Fernandes from Benfica. The 21-year-old arrives in London on an initial 18 month loan deal with a view to making the move permanent at the end of the 2020-21 campaign.

Manchester United have reportedly ruled out the prospect of making a mid-season bid to sign Christian Eriksen from Premier League rivals Tottenham Hotspur.

Tottenham in the pursuit of £30m-rated Serie A striker

According to Daily Mirror, Tottenham have been offered to sign Crystal Palace forward Wilfried Zaha.

According to Football Espana, Inter Milan are keen on the transfer of Barcelona midfielder Arturo Vidal as both the clubs don't tend to cease their negotiations.

Juventus on the verge of signing Swedish star

According to Sky Sports, Juventus are closing in on the signing of Swedish prospect Dejan Kulusevski for a deal worth £37.3m.

According to Spanish outlet AS, Real Madrid have stepped up their interest in Napoli midfielder Fabian Ruiz as the Spanish midfielder is yet to renew his contract with the Serie A club.

Manchester United are reportedly keen on making two additions to the squad when the transfer window reopens at the turn of the year.

Christian Eriksen is reportedly in talks with his agent and representatives of Man Utd regarding a January transfer window move. The Danish international has long been linked with a move from White Hart Lane to Old Trafford, the major stumbling block remains the fact that Tottenham will demand a fee of around £55 million.

According to Daily Mail, Real Madrid are interested in Rennes midfielder Eduardo Camavinga, who has been affixed a price tag worth €100m by the Ligue 1 club.

Manchester United will reportedly face competition from a host of top European clubs as they seek to land the signature of Tottenham Hotspur attacker Christian Eriksen.

Manchester United are prepared to make a fresh move for Tottenham Hotspur midfielder Christian Eriksen when the transfer window reopens next month.

Manchester United could reportedly use Nemanja Matic as part of the proposal to sign Tottenham Hotspur attacker Christian Eriksen.