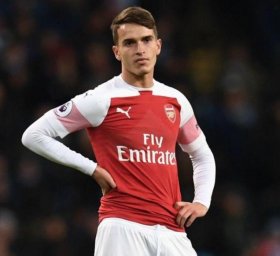 Martin Odegaard "Could Be An Embarrassment Like Denis Suarez" At Arsenal
58-year-old added. "Ceballos has done well during his time at the Emirates I think so hopefully Odegaard could come and he's got a point to
23/01 20:52

Manchester United and Arsenal will need to pay around £62.5m to sign RB Leipzig midfielder Christopher Nkunku this summer.

Even the most anti-Arsene Wenger supporters will agree that Unai Emery's first season at Arsenal hasn't gone according to plan.

Barcelona and Celta Vigo have agreed to transfer Denis Suarez. The midfielder, who spent last season on loan at Arsenal, will move to his former club of Celtic in a 16 million euro transfer deal.

Valencia are reportedly leading the race to sign Barcelona midfielder Denis Suarez, who has recently experienced a disappointing loan spell at Arsenal.

Belgium international Yannick Ferreira Carrasco has opened the possibility of joining Arsenal this summer after failing to do so during the 2019 winter transfer window.

Tottenham could make a shock move for Barcelona midfielder Denis Suarez this summer. According to multiple reports, the White Hart Lane outfit will make a move for the Arsenal on-loan player, who struggled to force his way in to the Gunners' first team this season during a temporary spell.

Chelsea could sign Arsenal flop, should Maurizio Sarri remain at the helm

Chelsea are reportedly said to have an eye on signing Barcelona's Denis Suarez, who recently had a forgettable loan stint with Premier League side Arsenal.

Arsenal's on-loan midfielder Denis Suarez is likely to leave parent club Barcelona at the end of this season, however it is expected that the Gunners will not make a permanent transfer for the playmaker. Suarez instead could move to Serie A, with Arsenal's Europa League quarter final rivals Napoli said to be interested in a permanent deal.

Arsenal are reportedly said to hold an interest in signing Bournemouth winger Ryan Fraser with Unai Emery aiming to bolster the wider options during the summer.

Arsenal have the opportunity to return to the top four of the league standings when they entertain Newcastle United at the Emirates Stadium on Monday night.

Arsenal manager Unai Emery has hinted that Denis Suarez could be handed his maiden start for the Gunners when they host Newcastle United in the Premier League on Monday night.

Arsenal midfielder Denis Suarez has hit out at rumours that Unai Emery is unhappy with performances of the on-loan player, with Suarez insisting he is performing well and slamming the reports on his own personal Twitter account. Emery worked with Suarez at Sevilla.

Arsenal have reportedly revived their interest in signing Paris Saint-Germain midfielder Christopher Nkunku after missing out on his signature in January.

Arsenal boss Unai Emery is reportedly said to have reservations over a permanent deal for Denis Suarez from Barcelona at the end of the season.

Spanish midfielder Denis Suarez has said that he is determined to secure a permanent move to Arsenal from Barcelona when the season concludes.

Barcelona have reportedly quoted a £17.3m package for Arsenal, if they are to pursue the permanent signing of Denis Suarez during the summer transfer window.

Arsenal make the trip to Belarus to face BATE Borisov in the opening leg of the Europa League round of 32. The Gunners have a good history against their opponents after having scored a minimum of four goals in both of the group stage meetings last season.

Arsenal boss Unai Emery will reportedly look to pursue three new players when the transfer window reopens at the end of the ongoing campaign.

Arsenal boss Unai Emery could reportedly have a tough summer transfer window with the club allotting just &pound40m to spend on new recruits.

Arsenal could retain their long-term interest in signing Adrien Rabiot when the current campaign comes to a close.