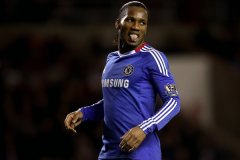 Jadon Sancho speaks on his admiration for two Chelsea legends

Borussia Dortmund forward Jadon Sancho has revealed that he used to admire the likes of Frank Lampard and Didier Drogba when they were at the prime of their respective careers at Chelsea.

Chelsea are reportedly willing to come up with a renewed approach for Lyon star Moussa Dembele with manager Frank Lampard likening his style of play to Didier Drogba.

Chelsea are reportedly considering a January move for Lyon's Moussa Dembele as they seek to provide competition for Tammy Abraham in the centre-forward role.

Chelsea attacker Eden Hazard has praised his side for their fighting spirit in their 2-1 win over Newcastle United on Sunday.

French outfit Guingamp have secured the signature of Didier Drogba's Isaac. The 17-year-old has joined the club's under-19 side after making his way up through the Chelsea academy.

Former Chelsea great Didier Drogba has revealed his intention to retire from professional football at the end of the United Soccer League season.

Zlatan Ibrahimovic was an instant hit at Manchester United, being the club's top scorer in his first season at Old Trafford. A contract extension looked a certainty until a season-ending injury struck during the club's Europa League quarter final. Now, the Swedish superstar could be set to agree a coaching role with Manchester United.