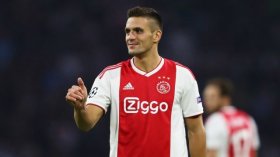 Paul Pogba ‘does things others dream of’ as Manchester United star equals assist record against Leeds and proves Red Devils ‘need him to win trophies’
former Gunners player Emmanuel Adebayor whilst at Spurs and Dusan Tadic for Southampton. The afternoon was so emphatic for Pogba, he even
14/08 14:48

Barcelona have reportedly switched their attention towards Ajax forward Dusan Tadic, according to Goal.com.

Former Southampton midfielder Dusan Tadic has emerged as a surprise summer target for Manchester City amid his form for Ajax during the ongoing campaign.

Southampton star on the cusp of Ajax move

Southampton attacker Dusan Tadic is reportedly on the cusp of sealing a move to Ajax for a reported fee of around £18m.

Manchester United won't able to bank on the services of Ashley Young for the next three domestic outings after he was handed a three-match retrospective ban for an elbow on Dusan Tadic during the goalless draw versus Southampton on Saturday.

Manchester United will seek to end their three-match winless run in the Premier League when they travel to Merseyside to take on Everton on New Year's Day.

Southampton midfielder Dusan Tadic has emerged as a surprise target for Arsenal ahead of the summer transfer window.

Southampton midfielder Dusan Tadic has emerged as a potential summer target for Arsenal. The Serbia international is also on the radar of Juventus and Napoli.

Chelsea could make a shock transfer bid for Southampton star Dusan Tadic in January. The winger has indicated that he would like to play Champions League football sooner rather than later.

Southampton are set to discuss a new deal with manager Ronald Koeman amid interest from top European clubs. The Dutchman was appointed as the Saints' head coach last summer after Mauricio Pochettino decided to link up with Tottenham Hotspur.

Arsenal starlet Serge Gnabry is a target for Southampton in January. The German youngster has slipped down the pecking order at the Emirates this season.

Ronald Koeman's Southampton have agreed a deal to sign Feyenoord striker Graziano Pelle. The 28-year-old has signed a three year contract at St Mary's and joins as a replacement for Rickie Lambert.

Sevilla sporting director Monchi had confirmed to the press yesterday that his club will spend the money received from the sale of Ivan Rakitic to Barcelona to find a new midfielder.

July 1st saw the Transfer Window re-open and numerous players swapped clubs having already made an agreement over the course of the last six months. Amongst yesterday's most noted rumours includes the potential move of Luis Suarez from Liverpool to Barcelona. Follow the rest of yesterday's rumours here.

Southampton have won the race to sign highly rated Serbian winger Dusan Tadic. The 25-year-old midfielder has spent the last four years playing in the Eredivisie, firstly for FC Groningen before moving on to Twente.

Reports in the Netherlands suggest that Twente midfielder Dusan Tadic could be on his way to the Premier league with Everton. The Serbian has been of the best performers for Twente who currently sit 3rd in the Eredivisie.