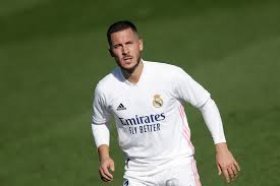 Chelsea have been handed a chance of re-signing Eden Hazard from Real Madrid during the summer transfer window.

Raphael Varane has said that he is 100 percent committed to the team amid the transfer interest from Chelsea and Manchester United.

Eden Hazard to be fit for Chelsea reunion - Zinedine Zidane

Real Madrid manager Zinedine Zidane has confirmed that Eden Hazard will be fit for the Champions League encounters against Chelsea.

Chelsea are reportedly looking at the prospect of re-signing Eden Hazard from Real Madrid in the summer.

Real Madrid are set to be without Eden Hazard for around three weeks following his thigh injury in the 2-1 defeat to Alaves last weekend.

Ivorian winger Jeremie Boga has opened the door to rejoin Chelsea when the transfer window reopens at the end of the campaign.

Real Madrid are reportedly set to go all out for Manchester City winger Raheem Sterling in the summer.

According to The Sun, Real Madrid are reportedly preparing a world-record move for PSG star Kylian Mbappe.

Real Madrid star Eden Hazard is set to return for the Copa del Rey clash on Thursday, according to a report from Daily Mail.

Chelsea have chance to sign Real Madrid star for £44m

Chelsea have been handed with the chance to land the signature of Isco from Real Madrid when the transfer window reopens in a week's time.

Real Madrid have reportedly set their sights on landing the signature of Sadio Mane from Liverpool during next summer's transfer window.

Real Madrid attacker Eden Hazard has fancied his former club Chelsea to register a surprise victory when they tackle Manchester City on the road this weekend.

Real Madrid attacker Eden Hazard is pleased with the form exhibited by his former Chelsea since the beginning of the Premier League campaign.

Eden Hazard insists Chelsea are much better without him

Real Madrid star Eden Hazard has said that Chelsea don't miss his services after excelling under the guidance of manager Frank Lampard this term.

Real Madrid star Eden Hazard feels Chelsea could have been in a good position to compete for the Premier League title this season, had they made a couple of signings during the summer.