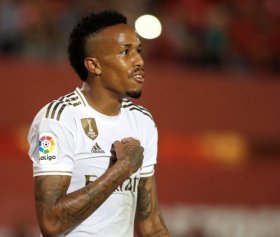 Real Madrid 'pull out of the race to sign Antonio Rudiger' after unsuccessful talks with the out-of-contract Chelsea defender... as Bernabeu chiefs reject his £200,000-a-week demands due to happiness with David Alaba and Eder Militao partnership
Militao As a result, Rudiger will not be heading to Madrid when his Chelsea deal expires in the summer, leaving the likes of Bayern, PSG
04/01 22:58

Chelsea have reportedly made a formal offer to sign Real Madrid defender Eder Militao in January.

Liverpool are reportedly planning a mid-season move for Eder Militao as they look to solve their central defensive crisis.

Arsenal are reportedly said to be considering a move for Real Madrid defender Eder Militao as they seek to strengthen their central defence for next season.

RB Leipzig defender Dayot Upamecano is reportedly prepared to turn down the likes of Arsenal and Tottenham Hotspur in order to join Real Madrid this summer.

Real Madrid boss Zinedine Zidane is reportedly determined to land the signature of Dayot Upamecano from RB Leipzig during the summer.

Tottenham have reportedly enquired about the signing of Real Madrid defender Eder Militao.

Real Madrid have reportedly made a fresh approach to secure the signature of midfielder Paul Pogba from Manchester United this summer.

Real Madrid's hierarchy are said to have concerns regarding a potential move to sign midfielder Paul Pogba from Manchester United in the summer.

Chelsea midfielder N'Golo Kante has assured that he is content with the club and has no plans of pursuing a fresh challenge at the end of the season.

Real Madrid are reportedly prepared to part ways with Mateo Kovacic in the summer, should Chelsea or any other side come up with a £42m bid for his services.

Real Madrid have agreed a deal with Porto for Eder Militao to make him Zinadine Zidane’s first signing. The deal is assumed to be in the region of €50 million for the defender Militao. Militao has become one of the brightest prospects after arriving from Sao Paulo for €4 million. Manchester United considered buying him in the winter transfer window.