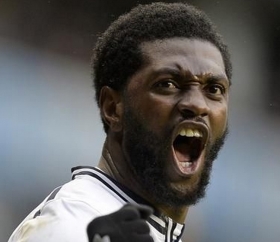 Aston Villa have reportedly been offered the chance to sign Togo international striker Emmanuel Adebayor on a free transfer. The forward, who had a spell with Man City, Tottenham and Arsenal in the past, is looking for a return to England and his eye on a move to another Premier League side.

Manchester United goalkeeper David de Gea has said that manager Ole Gunnar Solskjaer has the complete backing from the first-team squad despite the club's average start to the current campaign.

After being released by Manchester City at the end of last season, fullback Gael Clichy found himself in an unfamiliar position as a free agent. However, his search for a new club didn't last too long, with the announcement today that he had agreed a deal in Turkey.

Swansea City are reportedly prepared to bring former Arsenal and Tottenham Hotspur striker Emmanuel Adebayor back to the Premier League this summer.

Swansea City are looking into the possibility of a swap deal that would see Emmanuel Adebayor return to the Premier League, with Bafetimbi Gomis going the opposite way to Turkey.

Napoli are considering a move for West Ham United’s on loan striker Simone Zaza in the January transfer window, after Arkadiusz Milik was ruled out for several months with a knee ligament injury suffered on international duty, according to reports in Italy.

Napoli have set their sights of signing free-agent Emmanuel Adebayor after Arkadiusz Milik sustained a knee injury on international duty.

Former Arsenal and Tottenham Hotspur striker Emmanuel Adebayor is angry after he missed out on a move to Lyon. The French outfit opted against a deal after they found out the player could miss a couple of weeks due to his participation for Togo at the African Cup of Nations.

Adebayor's move to Lyon falls through

Former Arsenal and Tottenham Hotspur striker Emmanuel Adebayor has apparently snubbed a move to Lyon. The Togo international has been out-of-contract ever since his release from Crystal Palace earlier this summer.