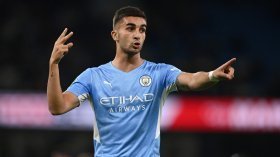 Morata, Ferran or Borja Iglesias; Who will be Spain’s World Cup striker?
... 2/10 Ferran Torres – Barcelona With 13 in 28 caps, the former Manchester City whizzkid averages a goal almost every other game for Spain.
21/09 19:00

Manchester City attacker Raheem Sterling has no plans of joining Arsenal or Tottenham Hotspur during the summer transfer window.

Barcelona are expected to sign Manchester City Ferran Torres before the end of the week, according to Sport.