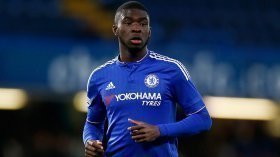 Chelsea to use Fikayo Tomori to sign Premier League star?

Chelsea could reportedly loan out Fikayo Tomori to West Ham United this summer in their attempt to secure the services of Declan Rice.

Chelsea have reportedly joined Manchester City in the race to sign Boubacar Kamara from Marseille in the next transfer window.

Chelsea are reportedly ahead of the likes of Arsenal and Everton in the race to sign Gabriel Magalhaes from Lille during the summer transfer window.

Chelsea are reportedly ahead of Arsenal and Everton in the race to sign Gabriel from Lille during the summer transfer window.

Chelsea move ahead of Everton to sign Brazilian defender

Chelsea have reportedly moved ahead of Everton in the race to sign Lille defender Gabriel Magalhaes in the summer.

Chelsea prepared to pay £21m for Serie A centre-back

Chelsea are prepared to offer £21m to land the signature of Marash Kumbulla from Hellas Verona.

Chelsea host Liverpool in the fifth round of the FA Cup tonight.

Chelsea are scheduled to face Bournemouth on the road in the Premier League this afternoon.

Chelsea have reportedly decided against making a move for Bournemouth defender Nathan Ake during the current transfer window.

Chelsea have reportedly been told by Brighton & Hove Albion that they will need to come up with a package of around £50m in order to sign Lewis Dunk during the current transfer window.

Chelsea defender Cesar Azpilicueta has been deemed doubtful to play against Southampton in the Premier League clash on Boxing Day.

Chelsea yet to finalise contract extension with Tammy Abraham

Chelsea have reportedly made little progress in their attempt to commit Tammy Abraham to a new long-term contract at the club.

Chelsea manager Frank Lampard has confirmed that defender Fikayo Tomori won't return to action when the Blues entertain Bournemouth in the Premier League on Saturday.

Chelsea have confirmed that defender Fikayo Tomori has penned a new long-term deal which will keep him with the club until the summer of 2024.

Chelsea manager Frank Lampard has confirmed that both Olivier Giroud and Fikayo Tomori will be unavailable for tonight's Champions League group stage clash against Lille.

Chelsea will entertain Aston Villa in tonight's Premier League clash at Stamford Bridge. The Blues have lost the last two league games but they will be hoping to return to winning ways against the Villains, who don't have the best of records on the road with just four points from seven games.

Chelsea make the trip to the Mestalla to face Valencia in tonight's Champions League clash.

Chelsea have the chance to register a seventh league win on the bounce when they face Manchester City on the road this evening. The west London giants have made a good start after the opening 12 games and they are presently in the third spot with a one-point advantage over the Citizens.

Chelsea are reportedly planning to reward new contracts to Tammy Abraham, Fikayo Tomori and Reece James following their impressive performances during the first half of the season.