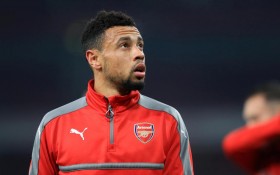 'Fantastic' Luis Diaz 'was a complete game-changer' after coming at half-time in Liverpool's comeback win at Villarreal, says Peter Crouch... as he and Michael Owen insist Colombian has to start Champions League final
from Boulaye Dia and Francis Coquelin. This saw Liverpool boss Jurgen Klopp tweak his tactics with Diaz replacing Diogo Jota in their
04/05 00:11

Gary Neville reveals his prediction for Chelsea vs Liverpool

Chelsea manager Frank Lampard has provided an injury update on Mason Mount and N'Golo Kante ahead of the Premier League clash against Liverpool.

Chelsea have received a positive update on midfielder Mason Mount following the ankle injury sustained during the Champions League clash against Valencia.

Everton defender Leighton Baines is a surprise target for Valencia. The La Liga side are flying high this season and have been monitoring the situation of Baines, who has yet to have signed a new deal at Goodison Park.

Arsenal have named Santi Cazorla in their squad for the knockout stage of the Europa League. The Spain international is currently recovering from a recurrent Achilles injury for which he underwent a 10th operation earlier this season.

Francis Coquelin feels he should have left Arsenal sooner

French midfielder Francis Coquelin has admitted that he 'almost regrets' not leaving Arsenal during last summer's transfer window. The 26-year-old joined Valencia for an initial £12m fee earlier on Thursday.

Arsenal have reportedly agreed on the winter sale of French midfielder Francis Coquelin to Valencia. The Gunners have accepted an initial fee of around £10.5m to sanction his sale.

Arsenal will look to maintain their push for a top-four position when they host Chelsea in Wednesday's Premier League clash. The Gunners have several injury concerns prior to the London derby, and Arsene Wenger is likely to make a few changes from the lineup which faced West Bromwich Albion.

Arsenal manager Arsene Wenger has confirmed that Olivier Giroud has sustained a suspected hamstring problem which could keep him out for a considerable period of time.