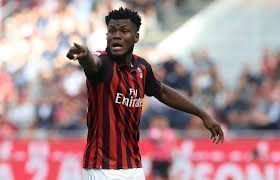 Newcastle United and Everton are reportedly in contention to land the signature of Franck Kessie from AC Milan during this summer's transfer window.

Arsenal are understood to hold an interest in signing AC Milan midfielder Franck Kessie during the summer transfer window.

Newcastle United could reportedly direct competition to Arsenal in the race to sign midfielder Franck Kessie from AC Milan this summer.

Serie A duo lining up moves for Lucas Torreira?

Serie A duo AC Milan and Napoli are reportedly weighing up January moves for midfielder Lucas Torreira, who has grown frustrated with his situation at Arsenal.

Franck Kessie is linked with a move to Wolverhampton Wanderers, according to The Birmingham Mail. The Ivorian is playing his third season at AC Milan after his stint with another Serie A side Atalanta.

AC Milan are reportedly prepared to include either Franck Kessie or Ricardo Rodriguez as they seek to secure the services of Arsenal midfielder Lucas Torreira.

Arsenal and Tottenham Hotspur are reportedly among the top sides in the running to sign Ivorian midfielder Franck Kessie from AC Milan this summer.

Tottenham Hotspur are reportedly prepared to compete with the likes of Chelsea and Arsenal in the race to sign Franck Kessie at the end of the season.

Arsenal and Chelsea are reportedly monitoring the proceedings of AC Milan midfielder Franck Kessie ahead of a potential transfer tussle for his signature during the summer.

Chelsea are reportedly prepared to offer Tiemoue Bakayoko in a swap agreement to sign Franck Kessie from AC Milan in the summer transfer window.

'I dream of United', Serie A midfielder reveals ambition to play for Manchester United

AC Milan midfielder Franck Kessie has revealed his ambition of pursuing a future move to the Premier League with Manchester United. The Ivory Coast international had attracted interest from the Red Devils last summer, but he instead joined the Rossoneri on a 24-month loan deal from Atalanta BC.