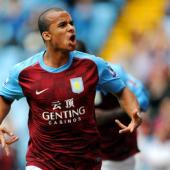 Harry Redknapp returned to football management on Sunday, with his first game in charge of Birmingham City against bitter local rivals Aston Villa at Villa Park.

Aston Villa's Decline Is Seven Years In The Making

After 105 seasons in the Premier League, Aston Villa was officially relegated to the Championship division when they lost to Manchester United. Despite the demotion, Aston Villa should have one of the best online soccer sportsbetting odds in the Championship division because they will be facing less talented teams that they faced in the Premier League.

Aston Villa forward Gabriel Agbonlahor has suggested that he plans to offer an apology to One Direction singer Louis Tomlinson after injuring him with a tackle during a charity match in honour of leukaemia survivor Stiliyan Petrov.

According to the Metro, the injury to the boyband star has led to a strong reaction from his fans on twitter, with some aiming " death threats " at Agbonlahor.

Agbonlahor told reporters: "It was just one of those things. I'll apologise to Louis when we meet up with everybody else after the game.

"I know he enjoyed playing in the game and it's fantastic that he took time out to be here, and the same with everybody who played.

"It was a fabulous day for Stiliyan Petrov and for Celtic and their respective charities. It's great to see all the people who came here to play in the game and all the fans who turned up to support such a worthy cause.

"I know Stiliyan is really grateful and appreciative and that's what today's all about."

A crowd of more than 60,000 showed up at Celtic Park as they witnessed the Stiliyan XI beat Celtic XI by a score of 5-3.

Chelsea beat Aston Villa in their second game of the season, in what was a joyous encounter full of chances between both clubs. Alberto Luna (og) and Branislav Ivanovic scored Chelsea's goals while young striker Christian Benteke scored Villa's consolation.

Aston Villa striker Gabriel Agbonlahor has been named the new club captain as Stiliyan Petrov battles with illness. This week, Petrov was diagnosed witha ctue leukaemia and will start treatment.

Aston Villa striker Gabriel Agbonlahor has no intentions to quit Villa Park, insisting that he is happy to stay put for the rest of his career. This week the 25-year-old pledged his long term future to the Villains.

Aston Villa could follow the example of Everton and Arsenal's pursuit of Thierry Henry and Landon Donovan on loan; as the Villains are reportedly keen on a move for LA Galaxy striker Robbie Keane.

Manchester City took the top spot in the Premier League table after an impressive 4-1 rout of Aston Villa at the Etihad Stadium.

Nemanja Milic is the latest striker to have been linked with a move to Aston Villa. According to reports Alex McLeish could offer 2m GBP for the player in January.

Shock news from the Daily Express this morning, who link Gabriel Agbonlahor with a mega-money move from Aston Villa to Tottenham this summer. It is understood the Villains are prepared to sell some of their stars as they begin a summer of transfer spending.

Bent wants to prove his worth

Darren Bent has scored fourteen goals so far in the Premier League and still waits for his permanent first team spot.

Marlon Harewood is reportedly a very wanted man. The Aston Villa striker is set to leave the club this summer, and Fulham, Rangers and Stoke City are among some of the teams confident of landing the forward.

Aston Villa forward Gabriel Agbonlahor thinks that Gareth Barry will stay at the club, despite the interest of Liverpool. Rafa Benitez has reportedly made an offer of £12 million for the midfielder, which Villa have considered derisory.

Aston Villa kept up their charge for fifth spot thanks to a late header from John Carew who brought the Villains back into the game at Goodison Park with a 2-2 draw. A victory for Everton would've guaranteed fifth spot for the Toffees.

Aston Villa striker Gabriel Agbonlahor is confident that he will continue to find his goalscoring feet after breaking his three month duck with a goal against Bolton last weekend. Agbonlahor targetted an England call up this week.

Aston Villa striker Gabriel Agbonlahor has targeted a return to the England line up. The forward finally ended a four month goal drought as he bagged his first goal in 2008 on Saturday in the 4-0 victory over Bolton Wanderers.

A Gareth Barry brace helped Aston Villa to a 4-0 victory over Bolton, and moved the Trotters a step closer to Premiership relegation. Aston Villa were in scintillating form, and Bolton's time in the Premiership looks to have come to an end now.

A late Nicklas Bendtner goal was enough to keep Arsenal on top of the league this evening. Aston Villa were 1-0 up early on thanks to a Philippe Senderos own goal, and the Gunners looked like they were destined for only their second home defeat at the Emirates.

Gabriel Agbonlahor is patiently waiting on Fabio Capello to call him up for the England side. The Aston Villa striker has been in sensational form.