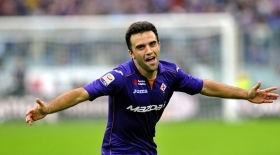 Insider drops Man Utd claim over Eriksen
squad over the age of 29. 1 of 10 Can you beat this impossible Manchester United quiz?! Starting off easy... Giuseppe Rossi Diego Forlan
17/06 14:20

Tottenham to rule out move for Giuseppe Rossi

Mauricio Pochettino has ruled out a potential move for former Man Utd player Giuseppe Rossi as Tottenham seek a replacement for injured Harry Kane. The striker suffered an injury that will keep him out of action until March at the very earliest.

Former Italy international Giuseppe Rossi is considering a possible exit from Fiorentina in the next transfer window.

Fiorentina frontman Giuseppe Rossi has emerged as a top transfer target for Liverpool in January.

Serie A side Fiorentina are reportedly preparing a bid for Aston Villa striker Christian Benteke in January.

Fiorentina forward Giuseppe Rossi will not be on the plane to Brazil after Italy's manager Cesare Prandelli left the former Man Utd striker at home. Rossi missed a large portion of the Serie A season through injury.

Tottenham Hotspur have been linked with a move for AC Milan forward Alessandro Matri, according to a report.

Fiorentina have dismissed speculation insisting that the club were interested in re-signing Manchester City striker Stevan Jovetic in January.