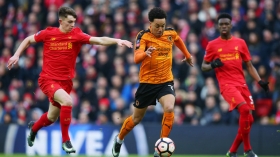 Leeds United loan watch as Helder Costa headlines Whites fringe players struggling for minutes
the Cherries, they have just signed experienced Premier League left-back Robbie Brady on a free transfer which is likely to even further
18/10 11:05

Championship club Wolverhampton Wanderers appear to have beaten the likes of Chelsea and Liverpool in the race to sign Porto midfielder Ruben Neves.

Premier League duo Arsenal and Chelsea could fight it out for the signature of Wolverhampton Wanderers winger Helder Costa.

Costa to turn down Chelsea, Arsenal for Monaco move

Wolverhampton Wanderers winger Helder Costa could reportedly turn down advances from Chelsea and Arsenal for a switch to former club AS Monaco.

Manchester United are reported to have held discussions over a potential move for Victor Lindelof on transfer deadline day.

Wolverhampton Wanderers have paid 13 million GBP to sign Helder Costa on a permanent basis from Benfica. The winger had been playing for the Birmingham-based side on loan.

Championship side Wolverhampton Wanderers are eyeing a loan swoop for Liverpool outcast Mario Balotelli. The Reds have found it hard to offload the Italian due to his hefty wage demands.