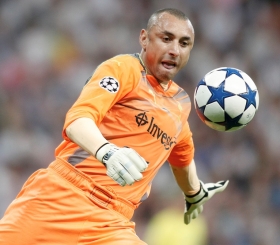 CHELSEA FAN VIEW: Frank Lampard against Jose Mourinho is good versus evil… A win over Tottenham would be the perfect early Christmas present
… pinging in goals from practically the halfway line at Wembley (Or Stamford Bridge - big shout out here to Heurelho Gomes, you...
21/12 09:21

Watford are targeting Gent's 6ft 7in goalkeeper Lovre Kalinic as Marco Silva looks to add competition for the number one jersey at Vicarage Road. The Hornets' new manager has turned to the Croatian international after missing out on Sporting Lisbon's Rui Patricio.

Following the non-stop Premier League opener on Friday night, Liverpool travelled to Vicarage Road for Jurgen Klopp's 100th game in charge of the club. Marco Silva took charge of his first Premier League game at Watford, in a match that provided more goals and entertainment.

Watford are plotting an approach to sign Sporting goalkeeper Rui Patricio during the summer transfer window. The Portugal international has spent his career in the Primeira Liga, and he could be up for a new challenge next season.

Bournemouth and Watford have reportedly been put on alert amid Lee Grant desire to push for a Stoke City exit in the summer.

After Manchester City and Manchester United drew their games at the weekend, Liverpool went into Monday night's Premier League fixture at Watford holding on to third place. Defeat could have seen the Anfield side drop below City on goal difference.

Portugal international Rui Patricio is prepared to end his long-term association with Sporting for a move to the Premier League this summer. Everton, Liverpool and Manchester City have previously been linked with the goalkeeper's signature.

Manchester United’s world record signing Paul Pogba has vowed to fight on, following the clubs third defeat in a row, suffered against Watford at Vicarage Road on Sunday.

The 24-year-old winger made a total of just 11 first-team appearances for Spurs after initially joining the club on loan from Juventus in August 2011 and even featured in all three of Tottenham's pre-season games during their tour of the United States this summer as well as scring a penalty in the club’s 3-3draw with Seattle Sounders. Still, he has made a switch to Serie A side Genoa.

Tottenham's Brazilian goalkeeper Heurelho Gomes will make a move to Championship side Leeds United on a loan deal. The 33-year-old is third choice goalkeeper at White Hart Lane.

Tottenham Hotspur's out-of-favour goalkeeper Heurelho Gomes has admitted that he would prefer a switch back to his home country, when his contract expires with the North London outfit next summer.

Tottenham goalkeeper Heurelho Gomes is eying a PSV Eindhoven return on a free transfer this season. The former Brazil goalkeeper spent the second half of the last season on loan at Hoffenheim in Bundesliga.

Heurelho Gomes has no plans to swap Tottenham for a move to his former club PSV Eindhoven. The Brazilian keeper is rumoured to have been linked with a move back to the Netherlands.

Tottenham manager Andre Villas-Boas is ready to shuffle his squad as he prepares for life without Gareth Bale. The Portuguese coach has been linked with a number of major names and is also ready to sell some of his fringe players.

Queens Park Rangers have stepped up their interest in Tottenham goalkeeper Heurelho Gomes. The Brazilian shot stopper has been told that he is free to leave White Hart Lane, and the R's have made a loan offer for his services.

Newcastle's in form goalkeeper Tim Krul is a reported target for Premier League rivals Tottenham. According to reports, Harry Redknapp is on the lookout for replacements for Brad Friedel; who is expected to retire at the end of the season.

Tottenham have been linked with a move for highly rated goalkeeper Marc-André ter Stegen. The Borussia Mönchengladbach shot stopper is very highly thought of in his homeland.

Tottenham's out of favour goalkeeper Heurelho Gomes will return to Brazil in January, and join a club on loan for six months before returning to Europe in 2012.