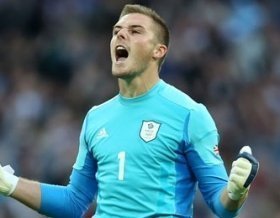 Liverpool have reportedly decided against signing a new goalkeeper before the domestic transfer deadline on Friday.

What next for Dean Henderson?

The impressive Dean Henderson has caught the eye this year wearing the number 1 jersey for Sheff Utd, with the club possibly heading towards Champions League qualification for the first time in their history. Henderson is one of the stand out players for United, but with his own future undecided, we look in to what might be the next possible outcome for the potential England international.

West Ham must snap up Stoke City goalkeeper Jack Butland in January in order to be able to wave goodbye to Adrian in the January window.

Chelsea are set to pay the £89m release clause of Atletico Madrid goalkeeper Jan Oblak as a replacement for Thibaut Courtois who is on his way to Spain, Mundo Deportivo reports.

Belgium international Thibaut Courtois has highlighted that he won't be extending his Chelsea contract beyond the 2018/19 season.

Chelsea are reportedly holding up Thibaut Courtois' move to Real Madrid as they are yet to find a suitable replacement for the Belgium international.