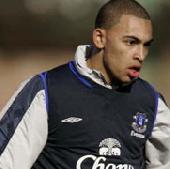 Watford manager Gianfranco Zola has assured that the Troy Deeney will remain at Vicarage Road at the conclusion of the summer transfer window.

West Ham boss Avram Grant has put Yakubu at the top of his transfer targets list this summer, according to reports this Sunday morning. It is understood the Hammers will offer a figure around 5 million GBP for the player.

David Moyes may look to sign Portsmouth's unwanted striker David Nugent on loan in the January transfer window from Portsmouth. It is understood that if all goes well, he may even consider a permanent move.

Phil Neville has revealed he is delighted that his current club, Everton, made a move for former Man Utd team mate Louis Saha. Neville feels that Saha is a wise acquistion for theToffees.

In midweek West Ham lost 2-1 to Everton in the Carling Cup, and what a time to make up for it and get some revenge, just four days later. Everton are undefeated in 11 games, and will need to be at their best to get something in this tough away match.

Chelsea are unbeaten at Stamford Bridge in over 69 matches, and are looking for their fiftieth league win over Everton. The Toffees travel full of confidence to London though, after their 2-0 win over Nurnberg in mid-week.

David Moyes has moved to praise young Everton striker James Vaughan after a number of impressive displays after returning from his injury nightmare. The young English striker scored the third goal for Everton as they defeated Birmingham 3-1 at the weekend.

David Moyes has insisted that it would have been unfair had Everton not grabbed two injury time goals from Carsley and Vaughan to defeat Birmingham on Saturday. Moyes said: "Not to have won would have been unjust. We showed great character and stuck at it, and I think we deserved the situation to turn in our favour."

It's the 177th Merseyside derby in the Premiership on Saturday's early kick-off between Everton and Liverpool at Goodison Park. Fernando Torres is missing for Liverpool, while Tim Cahill makes his long-awaited return. If Everton grab a victory they will level on points with Liverpool.