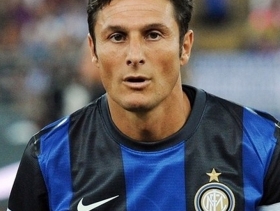 Inter Milan vice-president Javier Zanetti has reiterated that Lautaro Martinez is happy at the Nerazzurri despite the imminent interest from Barcelona.

Inter Milan vice-president Javier Zanetti has revealed that the club will do everything possible to sign Manchester City star Yaya Toure this summer.

Chelsea manager Jose Mourinho has revealed that the club had made no contact with Inter Milan's legendary midfielder Javier Zanetti over a summer switch.

Inter Milan's veteran midfielder Javier Zanetti has denied speculation linking him with a move to Chelsea in the summer.

Inter Milan have signed Javier Zanetti to a fresh contract. The 39-year-old defender will sign a one year extension to his current contract. Zanetti is currently club captain.

Manchester City manager Roberto Mancini has been tracking Argentina international left back Nicolas Tagliafico. The Banfield starlet has been in impressive form this year, and City club scouts have sent glowing reports back to England.

Ranieri banned for one match

Inter Milan boss Claudio Ranieri has received a one match ban after insulting the referee in the home loss to Napoli.