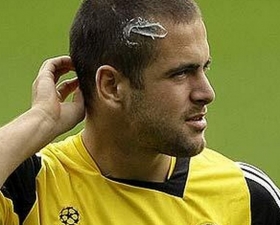 Former Chelsea star Joe Cole believes the club should move for the services of Erling Braut Haaland in the summer.

Joe Cole believes Leicester City defender Ben Chilwell would be taking a step up, should he make the move to Chelsea during the summer transfer window.

Joe Cole predicts where Chelsea will finish in the Premier League

Former Chelsea star Joe Cole is confident over the Blues' prospects of making the top four of the Premier League and believes there could offer an outside challenge for the title.

Joe Cole says Chelsea winger made the difference vs Lille

Former Chelsea star Joe Cole has heaped praise on Callum Hudson-Odoi following his impact off the bench against Lille in the Champions League.

League One side Coventry City have reportedly agreed on a loan deal for out-of-favour Aston Villa midfielder Joe Cole.

Former England international Joe Cole has revealed his desire to make a loan move to the Championship.

Aston Villa coach Paul Lambert admits that the club are still looking to sign new players ahead of the upcoming league season. The Villans could be about to sell Ron Vlaar to Southampton and subsequently Villa will look to bring in a new centre back.

Aston Villa are set to make Joe Cole their second major signing of the summer. The former Liverpool and West Ham midfielder will pen a two year contract at Villa Park.

French Ligue 1 outfit Lille are understood to be interested in signing West Ham United midfielder Joe Cole in the summer.

England's Left Side of Midfield - The Modern Dilemma

With the World Cup in Brazil a matter of weeks away, Roy Hodgson will have a good idea of  who will be on that much coveted flight to the land of sun, samba and football.

West Ham United midfielder Joe Cole has denied reports linking him with an exit from the London outfit during the New Year.

Hammers midfielder Joe Cole has advised Andy Carroll to make a permanent move to West Ham from Liverpool. Striker Carroll has fallen out of favour with Anfield boss Brendan Rodgers and spent last season on loan at Upton Park.

West Ham manager Sam Allardyce hit out at the current transfer window system, claiming that the Hammers are likely to be offered 1000 players over the course of the month. West Ham have been busy recruiting Joe Cole, Marouane Chamakh and Wellington so far in January.

Lille's on loan midfielder Joe Cole has admitted that he would like to make his temporary stay at the Ligue 1 champions permanent. Liverpool are willing to listen to any offers for the attacking midfielder.

Beckham to wrap up PSG switch

David Beckham will wrap up a move from LA Galaxy to Paris St. Germain this weekend, and will put pen to paper on a massive contract worth around 150,000 GBP per week for 18 months.

Liverpool could still keep Joe Cole, despite the player's successful loan spell at French champions Lille. Cole admitted that he would like to stay at Lille if the opportunity presents itself.

Lille loanee Joe Cole is confident that Belgium international midfielder and club teammate Eden Hazard has the potential to become one of Europe's best players.

Lille's newest signing Joe Cole hopes that moving to France will help him regain his place in the England team. The former Liverpool midfielder struggled at Anfield last year and has since moved to France.

Liverpool midfielder Joe Cole has admitted feeling hurt after being frozen out of first-team plans for the Reds last season.