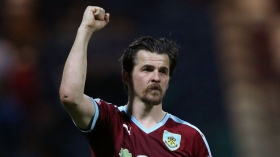 Joey Barton to practice Bristol accent after landing job and trolls Sancho again
…” And he used the latest interview to take another cheeky dig at the Manchester United transfer target. “We’ve all done it,” He added. “You
23/02 14:10

Chelsea manager Antonio Conte has dismissed suggestions that Ross Barkley's move from Everton fell through due to his phone being switched off.

Former Manchester City and Newcastle midfielder Joey Barton has criticised the Premier League and says it is one of the biggest reasons behind the failings of the England national team.

Burnley have set their sights on a second raid on Stoke City with midfielder Glenn Whelan linked with a potential move to Turf Moor.

Burnley midfielder Joey Barton has been banned from all football related activity for eighteen months, after admitting to an FA charge in relation to betting. The controversial player has announced that he will appeal the length of the ban, which may see his career come to an end.

Temperamental midfielder Joey Barton could be on the cusp of a shock return to Ligue 1 giants Marseille after reports from France suggested the club were weighing up a move for the midfielder. Barton's future in British football hangs in the balance after more off the field problems at Scottish club Rangers.

Scottish football: From the sublime to the ridiculous

Scottish football has an uncanny knack of turning the sublime into the ridiculous.  Given earlier in the tournament we had witnessed a re-draw of the quarter-final ties following a calamitous botch-up with the balls, we should not have been surprised.  But the events of Saturday afternoon were far more sinister and another dark day for Scottish football.

With Aberdeen due to return to competitive action on June 30th, there is little time to breathe before they kick off the new campaign.  So how will the Dons reflect on the season 2015/16?

Championship side Joey Barton have completed the signing of Joey Barton on a free transfer.

Free agent Joey Barton has revealed that his proposed move to West Ham United has reached a dead end.

Midfield misfit Joey Barton is on the verge of agreeing a brand new contract with Queens Park Rangers. Harry Redknapp is set to show his faith in the player with a two year extension to his contract.

Sunderland are considering a sensational move for Queens Park Rangers' midfielder Joey Barton. The player, who spent last season on loan at Marseille, has reportedly been told he is free to leave QPR at the end of this season.

To appreciate Harper's 20 years of service for Newcastle United, which came to an end when he joined Hull City Tigers this summer, he will be honoured by an all-star team facing off against AC Milan at St James' Park.

The all star squad will feature the likes of Alan Shearer, Andy Cole, Les Ferdinand, Faustino Asprilla and Joey Barton in the line-up.

Crystal Palace are hoping to agree deals for Joey Barton and Jimmy Kebe. Kebe is currently playing on loan at Reading whilst Barton is currently at QPR.

Ligue 1 side Olympique Marseille have already made an offer to QPR midfielder Joey Barton and are waiting for a response according to the club's sporting director.

Midfield misfit Joey Barton's representatives have reportedly offered the player to Roberto Martinez's side Everton, as the player's future at French side Marseille has come into some doubt.