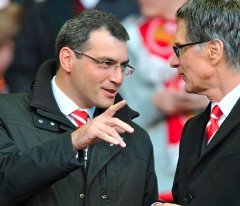 Liverpool are reportedly open to the prospect of re-signing Philippe Coutinho from Barcelona as they seek to make another push for the Premier League title next season.

Real Madrid are reportedly set to tempt Liverpool with a summer bid of around £60m for the services of one of the club's most influential players in recent years.

Liverpool owner John W Henry has asserted that the transfer saga of their star striker Luis Suarez has been "resolved" after he ruled out the possibility of selling the Uruguayan International to Arsenal or any other top side.

Arsenal manager Arsene Wenger has no new news to report regarding Luis Suarez's potential transfer from Liverpool to the Emirates. The Uruguayan international is reportedly ready to take his case to the courts to force a transfer to the Gunners.

Liverpool owners have no plans to sell club

Liverpool owners Fenway Sports Group (FSG) were reportedly ready to sell Liverpool, just three years after their purchase of the club. However, FSG have moved quickly to deny reports of a sale.

Liverpool striker Luis Suarez is to hand in a transfer request on Friday morning in an effort to force a transfer away from Anfield. Arsenal yesterday made an offer to their Premier League rivals of £40m + £1 and activated a clause in Suarez's contract that allows him to speak to another club.

Liverpool to announce manager on Friday

Liverpool owners Fenway Sports Group (FSG) will announce their new manager on Friday evening. The club have already been locked in talks with Roberto Martinez of Wigan, whilst Swansea manager Brendan Rodgers is also in the frame.

Liverpool owners Fenway Sports Group (FSG) have made yet another approach for former Barcelona coach Josep Guardiola, as the American owners scour Europe to find the best possible replacement for Kenny Dalglish.

Liverpool owner John W Henry is hoping that the success in the Carling Cup at the weekend will be the catalyst for success in a long term pursuit of more silverware for the Reds. Henry took over the club two years ago, and Kenny Dalglish ensured a six year silverware drought was brought to a close.