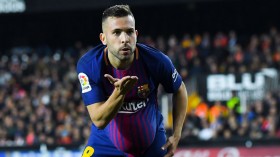 Chelsea defender Marc Cucurella has been linked with a possible return to Barcelona during next summer's transfer window.

Arsenal have received a boost in signing Barcelona defender Junior Firpo ahead of the summer transfer window.

Barcelona and Arsenal are reportedly prepared to compete with Liverpool in the race to sign Layvin Kurzawa on a free transfer.

Barcelona could reportedly go head-to-head with Chelsea in the race to sign Alex Telles from Porto during this summer's transfer window.

Barcelona have secured the signing of Dominican-born defender Junior Firpo from La Liga rivals Real Betis in a transfer deal worth up to 31 million euros. The 22-year-old came through the ranks at Real Betis and has appeared four times for Spain's under-21 side.

Manchester United defender Matteo Darmian has been earmarked as a surprise transfer target for Barcelona as they seek to strengthen the left side of the defence.

Arsenal could reportedly face competition from Barcelona in the race to sign David Alaba from Bayern Munich at the end of the season.

Barcelona have reportedly earmarked Arsenal defender Nacho Monreal as a probable summer target as they seek to strengthen their options on the left side of the defence.

Barcelona have reportedly set their sights on landing Nacho Monreal from Arsenal when the current season comes to a close.